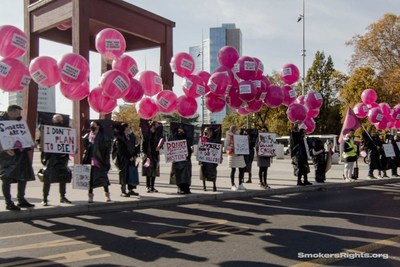 Organized by the Smokers Rights Movement (SRM), the protest challenged the government’s approach to tobacco control.  SRM founder Max Kosenko explained: “We are protesting the oppression of smokers and the lies of tobacco control. And we are fighting for smokers’ rights to access less lethal products.”

According to Smokers Rights Movement, scientific research on tobacco harm reduction has been systematically ignored by governments, with deadly results: despite decades of spending on tobacco control, smoking remains the world’s leading cause of death, killing 20,000 people a day — three times more than COVID-19 — and the number of smokers is increasing.

“This is not a problem of bad habits; it’s a problem of bad products,” said Kosenko. “Nobody would tolerate another legal product that killed 50% of users. But instead of asking ‘Why do we still sell cigarettes?’, we blame smokers and ask ‘When are they going to quit?'”

The risks of smoking stem not from tobacco’s active ingredient, nicotine, but from the delivery method: inhaling the smoke from burning leaves. Yet this delivery method dominates the market, for one simple reason: healthier alternatives have been systematically suppressed in the name of tobacco control.

Before the WHO was formed in 1948, governments worked on the question of how to make tobacco consumption safer.  But later focus was completely shifted on elimination of nicotine use, persistently disregarding scientific research on the benefits of tobacco harm reduction.  No drug has ever been successfully eliminated through prohibition. But harm reduction approaches can mitigate the health risks and save lives.

The Smokers Rights Movement is a grassroots movement founded in 2021. Its online, crowd-funded community collaborates on various projects to promote tobacco harm reduction and save smokers’ lives.

Movement founder Max Kosenko, 40, has spent the last decade working to improve cigarette substitutes, after e-cigarettes helped him quit smoking. He used the profits from his company to jump-start the SRM to move the world away from lethal tobacco products.

The SRM is strictly anti-commercial, forbids any connection to cigarette sales, and is 100% funded by the people.