AUSTIN, Texas, Aug. 25, 2021 /PRNewswire/ — Six months after Winter Storm Uri, which left thousands of Texans without power in February, Texans for Fair Energy Billing (TXFEB) warns that legislative inaction has left the Texas grid unprepared for the upcoming winter. The consumer advocacy group formed in the wake of February’s fatal winter storm urges Gov. Greg Abbott to add energy reliability and price transparency to his Special Session agenda to ensure updates occur in time for what is predicted to be an especially harsh winter. 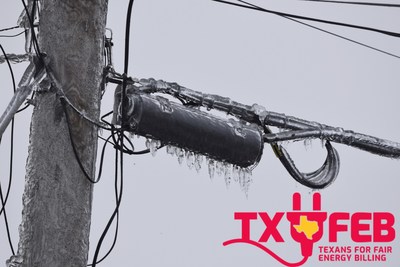 Gov. Abbott has the opportunity to make real progress on this bi-partisan issue…We must act now before it is too late.

The Farmers’ Almanac predicts another cold winter in Texas with winter freezes and snowstorms in late January akin to Winter 2021 – yet promised weatherization has not occurred, leaving the grid vulnerable to another winter storm.

“There is still more that must be done in order to protect Texans from the harm caused by our energy market,” said TXFEB Founder Brandon Young. “Gov. Abbott has the opportunity to make real progress on this bi-partisan issue which is on the minds of all Texans as we head into the colder months. We must act now before it is too late.”

The devastation and fatal events of Winter Storm Uri will impact Texans and our economy for years to come. The storm cost hundreds of lives and billions of dollars. With another harsh winter on the horizon, the state must act quickly to prevent another disaster. However, government leaders do not appear worried. In the six months since the storm, little has been done to address the causes and lasting effects of Uri.

Unless state leaders take immediate action to address grid concerns in the next six months, Texans may commemorate the first anniversary of winter storm Uri in the dark.

About TXFEB:
Texans for Fair Energy Billing (TXFEB) is a statewide consumer coalition amplifying the voices of Texans impacted by unlawful energy prices by advocating to reprice energy charges from the February 2021 winter storm.