Single-Family Zoned Neighborhoods in California Under Attack: New Book Explains What Every Homeowner Needs to Know

Get the book and decide for yourself: Stay in your home or sell the house now? 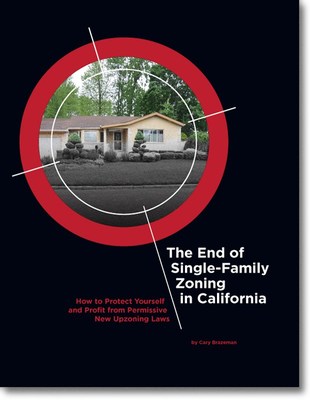 A new book for homeowners explains everything they need to know about the end of single-family zoning in California, including what the new laws allow property owners and developers to build on single-family parcels across the state. The book was written for owners of California’s 7,000,000 single-family homes to help them decide: Stay in the house or sell the house now?

“There’s been some attention to the laws, but not nearly enough given how they impact homeowners, people renting or sharing homes who may be displaced by redevelopment, and neighborhoods,” says Cary Brazeman, author of “The End of Single-Family Zoning in California: How to Protect Yourself and Profit from Permissive New Upzoning Laws.”

Homeowners who read the new book will learn:

The book also illuminates how the laws can be exploited to destroy historic resources and produce dense housing in high-risk fire zones. Read the book to learn:

“Ending single-family zoning is a red herring,” Brazeman says. “It’s not the problem in California.” In the book, he lays out a better way to create more housing and, in the process, create new equity opportunities for people to build wealth through housing ownership. Brazeman’s plan includes commercial boulevard revitalization, with significant multifamily residential construction in commercial zones, in Los Angeles and around the Bay Area.

Cary Brazeman is the author of “The End of Single-Family Zoning in California: How to Protect Yourself and Profit from Permissive New Upzoning Laws.”

Cary is a real estate expert and neighborhood advocate from Los Angeles. He has a warning for California homeowners: “Get familiar with the new laws and decide for yourself whether to stay in your home, or sell your home before it is potentially devalued as a result of changes now allowed in your neighborhood.”

“The End of Single-Family Zoning in California: How to Protect Yourself and Profit from Permissive New Upzoning Laws” is available for free download.