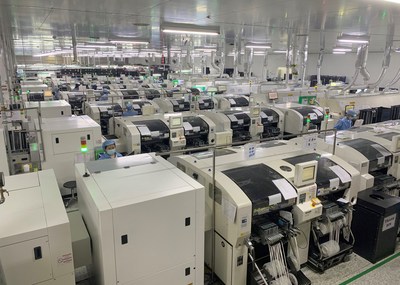 Being a professional CPE (Consumer Premise Equipment) manufacturing site for global Telecom operators, Sercomm Philippines uses the most advanced manufacturing processes to produce high-quality products. The Philippines factory is a state-of-the-art automation facility that specializes in wireless devices. With the strong support of DTI (Department of Trade and Industry) and MECO (Manila Economic and Cultural Office in Taiwan) in its inception, Sercomm Philippines responds to global customers’ demand through continuous operation during the pandemic and support Sercomm’s future business growth.

Sercomm (TWSE: 5388), the parent company of Sercomm Philippines, is a leading global manufacturer of telecoms and broadband equipment. Founded in 1992 with annual revenue of USD 1.27 billion in 2020, Sercomm has focused on developing embedded solutions to make networking simple and affordable. Headquartered in Taipei, Taiwan, Sercomm’s global operations network covers markets in North and Central America, Europe, and the Asia Pacific. Its customer base includes the world’s top service providers, networking OEMs, and system integrators.

Secretary Ramon M. Lopez of the Department of Trade and Industry said, “Sercomm, leads the way among other Taiwanese companies that have decided to establish their manufacturing bases in Philippines, growing rapidly in the past two years from inception. This is an excellent example for other companies still considering to make the Philippines their second home, with Sercomm posting record gains in export volumes with their ability to meet the fast-growing global demand for their products. We are very pleased that the Philippines has played a major role in the company’s stellar performance.”

“We are very happy to note that Sercomm’s decision to locate a major part of its global manufacturing operations to the Philippines in 2019 is overwhelmingly validated by the numbers in their recent filing. Recognizing the opportunities then and the ability to meet global demand by strategically growing their capabilities in the Philippines in support of their global supply chain in a relatively short period of time have certainly contributed to these milestones,” said DTI Undersecretary Ceferino S. Rodolfo. “We expect more manufacturing companies following the positive experience and success of Sercomm,” added Rodolfo, who also serves as Managing Head of the Board of Investments (BOI).

“We are very proud to have achieved the production milestone in such a short time, especially during this unprecedented time. Sercomm Philippines has become a crucial portion of Sercomm’s global operations,” said James Wang, CEO of Sercomm, “We plan to continuously expand our operations to support future business growth in the local and global markets.”

Michael Alfred Ignacio, Trade Representative and Director of Commercial Affairs at the Manila Economic and Cultural Office in Taiwan said, “We have worked very closely with Sercomm since about two years ago, when they have first chosen the Philippines as a major manufacturing hub for their clients, and I am amazed at how fast this global leader in communications technologies was able to scale their production capacity with us in so little time, while continuing to remarkably expand their market share. Sercomm is a shining example for many other Taiwanese companies that are looking to potentially locate their production capacities to the Philippines, particularly those that highly value our people, a world-class human resource that is globally sought-after.”