Scientology Volunteer Ministers of Verona Honored for Their Community Service

LOS ANGELES and VERONA, Italy, Oct. 30, 2021 /PRNewswire/ — Scientology Volunteer Ministers of Verona received a certificate of recognition from the mayor of Verona this month as part of a celebration in honor of the sesquicentennial of the Verona Municipal Police. 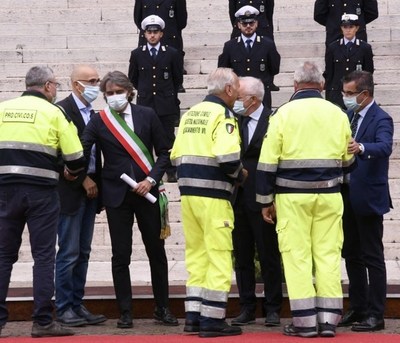 Volunteer Minister response to the needs of the city since the pandemic began relieved the load of city social services.

Active in Verona since 2008, the group’s response to the needs of the city since the pandemic began was an essential service, helping relieve the load of city social services.

Throughout Northern Italy, the region most severely affected by COVID-19, Volunteer Ministers of Pro.Civi.Co.S

The Church of Scientology Volunteer Ministers program is a religious social service created in the mid-1970s by Scientology Founder L. Ron Hubbard. It constitutes one of the world’s largest independent relief forces.

With the events of the 9/11 terrorist attacks in New York City, Scientology ecclesiastical leader Mr. David Miscavige called on Scientologists to redouble their efforts to aid their fellow man. He issued a directive entitled “The Wake-Up Call,” which inspired astonishing growth within the Volunteer Minister program. In response, Volunteer Ministers of Italy formed Pro.Civi.Co.S, which was entered into the registry of the National Department of Civil Defense the following year. The Verona chapter of Pro.Civi.Co.S was formed in 2008 and is listed in the regional register of civil protection associations.

Over the past two decades, Pro.Civi.Co.S and the Volunteer Ministers of Italy have responded to disasters at home and abroad, including the L’Aquila and Amatrice earthquakes in Italy, the South Asian tsunami of 2004, the Haiti earthquake of 2010, the 2019 Albania earthquake, and the 2020 Croatia earthquake.

A Volunteer Minister’s mandate is to be “a person who helps his fellow man on a volunteer basis by restoring purpose, truth and spiritual values to the lives of others.” Their creed: “A Volunteer Minister does not shut his eyes to the pain, evil and injustice of existence. Rather, he is trained to handle these things and help others achieve relief from them and new personal strength as well.”

For more information, visit the interactive timeline, 20/21—A Look Back & A Look Ahead, on the Scientology website.