TORONTO, Nov. 12, 2021 /CNW/ – The ongoing pressures of the pandemic and the impact of inflation are having a significant effect on the lives of Canadian families and their children. Over the last year, 65 percent of the children served by The Salvation Army were between the ages of six and 11. The number of school-aged children living in poverty is worrisome. As poverty continues to affect the ability for all Canadians to survive and thrive, The Salvation Army officially launches its 2021 Christmas Campaign—the organization’s largest public fundraising drive of the year. 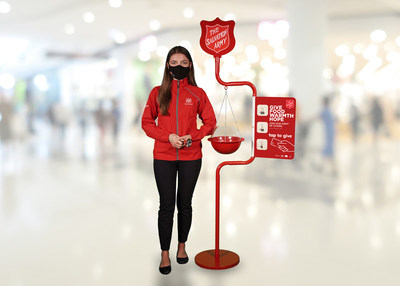 Scarce or non-existent resources are driving The Salvation Army’s desire to strengthen families. Reasons for visits to our food banks and use of our other social services include low wages and reduced work hours, homelessness, increased cost of food and utilities, and depleted resources. The number of households served by The Salvation Army increased this year by 11 percent.

“The fact that the number of people using our services continues to increase is alarming to us, and means we still have important work to do,” says Lt-Colonel John Murray, territorial secretary for communications. “One in 11 Canadians lives in poverty and 1.4 million children cannot access enough food. This Christmas season, and throughout the year, your committed support gives them an opportunity to be housed, fed, lifted and loved.”

With a national $20 million fundraising goal, the Christmas Kettle Campaign enables The Salvation Army to provide practical assistance to thousands of families and individuals who have met with hard times. Last year, The Salvation Army helped more than 2.1 million people across Canada, providing 2.8 million meals, assisting 245,000 with Christmas food hampers and toys, and over 1.5 million with food, clothing or practical help.

Contributions to the kettle campaign allow The Salvation Army to continue operating its life-changing programs, such as substance-use recovery, housing support, meal programs, job and skills training, and budgeting classes. Every donation to any of the 2,000 kettle locations across the country remains in the community in which it was given, to support local needs. For the third consecutive year, The Salvation Army is partnering with tiptap, the producer of the world’s smallest contactless payment receiver. More than 1,800 units across Canada will offer a tap-and-go, safe and simple way to donate.

Each year, The Salvation Army relies on the support of thousands of kettle workers who give their time and energy to collect donations at kettle locations across the country. Furthermore, the campaign would not be possible without the support of numerous corporate partners, including Walmart Canada, BellMedia, Loblaw Companies Limited, Costco, BC Liquor Stores, LCBO (in Ontario), Canadian Tire, Cadillac Fairview, Oxford Properties, Ivanhoé Cambridge, Morguard, Metro, Safeway, Save-on-Foods, Sobeys, Bass Pro Shops, The Salvation Army National Recycling Operations (thrift stores) and many more, who allow Christmas kettles to be placed at their stores or an opportunity to donate.

About The Salvation Army:

The Salvation Army is an international Christian organization that began its work in Canada in 1882 and has grown to become one of the largest direct providers of social services in the country. The Salvation Army gives hope and support to vulnerable people in 400 communities across Canada and in more than 130 countries around the world. Its community and social service activities include: hunger relief for individuals and families through food banks and feeding programs; shelter for people experiencing homelessness and support for those needing housing; rehabilitation for those struggling with substance-use recovery; long-term care and palliative care; Christmas assistance such as food hampers and toys; after-school programs, camps and school nutrition programs for children and youth; and life-skills classes, such as budgeting, cooking for a family, and anger management. When you give to The Salvation Army, you are investing in the future of marginalized and overlooked people in your community.

News releases, articles and updated information can be found at www.SalvationArmy.ca.

A list of regional media representatives can be found at: