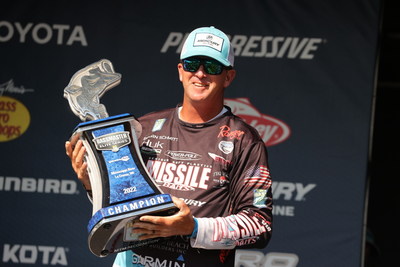 Schmitt, who won his first Elite on Lake Champlain in 2021, started Championship Monday in third place, trailing Canadian pro Chris Johnston by 2-1. Adding 16-11 in the final round, Schmitt edged Johnston by just 4 ounces and won the $100,000 prize. He also earned an automatic berth into the 2023 Academy Sports + Outdoors Bassmaster Classic scheduled for March 24-26 in Knoxville, Tenn.

“I’d rather have a blow-out win because this is too stressful,” Schmitt said of the dramatic finish. “When Chris brought his bag up, it looked big — I thought he had it!

Throughout the event, Schmitt focused his efforts on a 200-yard stretch of eelgrass in Pool 8. With multiple wins on grassy tidal fisheries from the Potomac River to the James River, he leveraged his vast knowledge of how bass relate to moving water and vegetation to progressively whittle down his spot.

“When you have a fishery with a lot of grass, it’s always about finding something different,” Schmitt said. “The first day, it was about depressions and edges. Then, it got so flat calm that I realized the fish would pick a place on that grass edge or depression and that was the only place you could get bit.”

Seeing the bass were not randomly strolling through the eelgrass, Schmitt dissected his area until he identified the money spot. Amid the grass flat’s consistent 6-foot depths, he identified an 8-foot trench measuring about 20 feet wide by 100 yards long.

“There was about a 50-foot section where, whenever I would get a bait on the bottom, I could feel rock,” Schmitt said. “So, there was rock meeting grass in a depression.”

The key to the spot’s attraction was the very detail that derailed many anglers’ game plans. Heavy rains from a storm that delayed the Day 2 launch by one hour muddied much of Pool 8. However, Schmitt’s area was shielded from the mud plume, while the eelgrass filtration left only beneficial water flow.

“It’s a challenge, but I enjoy fishing in current because I feel current makes fish predictable,” Schmitt said. “When I won here in 2017, it flooded. It was just like this — my spot got better and better.”

Schmitt caught most of his keepers on a Carolina-rigged Missile Baits Baby D Stroyer in green pumpkin flash. He added one of his limit fish on a bone-colored Spro Fat Papa Walker.

“I used a 3 1/2- to 4-foot leader and I think that’s why they would bite that bait,” Schmitt said. “There was so much eelgrass, the weight would get down and the bait would float above the grass for a minute and that’s when you would get bit.”

Johnston, who makes his home in Otonabee, Ontario, turned in limits of 16-4, 15-10, 16-12 and 14-6 for a second-place total of 63-0. Spending his tournament in Pool 8, he did most of his work by throwing a chartreuse/white Spro Bronzeye Frog around shallow eelgrass mats.

“I had to adjust in one area today; the fish moved on me a little bit,” Johnston said. “I just went frog fishing and today I lost the most fish of any day in this event. It was one of those days and it wasn’t meant to be.

“I fished clean the first three days, but today I just had (several) come unbuttoned.”

Mats with current exposure proved most productive for Johnston. In addition to the largemouth he caught on the frog, Johnston also caught keeper smallmouth on a bone-colored Zara Spook.

Combs fished Pools 8 and 9 each day, but only the former produced Monday. His main pattern involved sandbars and other current breaks where fish would position to feed.

“I had several different areas, but everything was current-related; it had to have a little current trickling through,” Combs said. “Today, I caught my fish on a current seam and I caught a ton of fish. This morning, I caught them on every cast for 45 minutes. It was insanity.

“I never could dial into the big fish this week. I caught a ton of fish in the 3- to 3 1/2-pound range, but I never could figure out how to catch those 4-pounders.”

The tournament was hosted by Explore La Crosse.