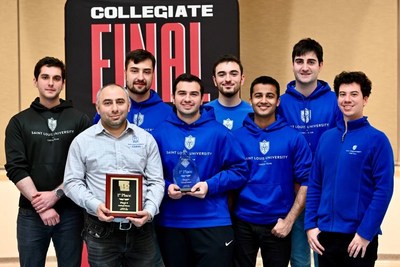 Co-hosted by the United States Chess Federation (USCF), the President’s Cup is an annual invitational team championship ­open to the top four U.S. schools from the most recent Pan-American Intercollegiate Team Chess Championship. SLU won the Pan American championship with a perfect score in January.

“We have won every event we can participate in,” said SLU Chess Team Coach Alejandro Ramirez. “The National Champion feather was the last one we were missing on our cap. Now SLU is undoubtedly the No. 1 chess university in the country.”

The Saint Louis University Chess Team was established in fall 2016 as a partnership between SLU and the Chess Club and Scholastic Center of Saint Louis, with support from SLU alumnus, University trustee and chess enthusiast Rex Sinquefield.

The team is not just a club activity but rather a strategic effort by administrators and alumni to recruit promising players and build on the University’s reputation for academic excellence. SLU recruits undergraduate and graduate students through donor-sponsored competitive chess scholarships, which can include tuition, room and board, and fees.

The chess team is headquartered in a recently remodeled space on campus that allows members open access to analyze the game using two powerful computers. The chess facility also has four DGT electronic chess boards that enable team members to input plays as they study them.

For more information on chess scholarships and the chess program at SLU, visit slu.edu/life-at-slu/chess-team.

This news release was issued on behalf of Newswise(TM). For more information, visit http://www.newswise.com.