LONDON, March 16, 2022 /PRNewswire/ — Russian artist Andrei Molodkin has produced a portrait of Vladimir Putin filled with Ukrainian blood as a protest against the invasion of Ukraine. The sculpture has been made in collaboration with his Ukrainian friends and co-workers, based with him at The Foundry in France, who donated their blood before returning to their home country to fight. Since, their wives and children have fled the war and are living with Molodkin at The Foundry. 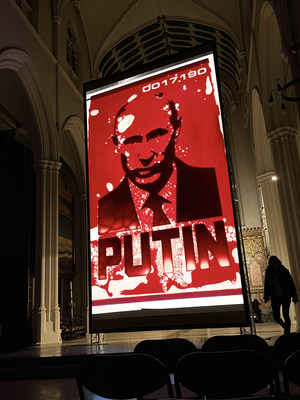 An eight metre-high projection of ‘Putin Filled with Ukrainian Blood’ was installed briefly as an icon at the altar of a church in central London on Wednesday 16 March.

Texting from outside Lviv, Oleksandr Turchynets, who donated his blood said – “I had to return to protect my homeland. I gave my blood before I came to fight to show whose blood is being spilt at the hands of one man.”

Andrei Molodkin said: “I created this work as an act of solidarity between the Russian and Ukrainian people. It’s the dream of any criminal regime to silence discussion. It’s time for us to use art to send a clear message about war and who Putin really is.”

Notorious for his use of blood and oil, Molodkin has dedicated his life to deconstructing broken concepts of Democracy, Government and Imperialism. As a result, he has been subject to extensive censorship. In 2009 Molodkin represented Russia at the 53rd Venice Biennale with ‘Le Rouge et Le Noir‘, consisting of two figures of the Winged Victory of Samothrace, filled with the blood of Russian soldiers and Chechen oil. Speaking out about the Russian regime and oil politics, a scandal unfolded with the curator censoring the work the night before the public opening and prohibiting Molodkin from communicating with the press.

Andrei Molodkin (b. 1966) grew up in northern Russia and served in the Soviet Army convoying missiles through Siberia. His artistic practice is distinctive for his approach to material, almost exclusively working in human blood, crude oil, steel and biro. His installation ‘Liquid Modernity’, 2009 entered the Tate Collection, UK in 2012. Since 2014, Molodkin has been reconstructing The Foundry, a production site for the radical underground. In 2019 Molodkin collaborated with Drill rappers Skengdo & AM and Drillminister on the track ‘Political Drills’ fighting for freedom of expression.