NEW YORK, Oct. 21, 2021 /PRNewswire/ — Last night, Robin Hood’s annual benefit returned to New York City with a star-studded evening that raised $77.5 million toward the fight against poverty. The event brought together the biggest names in entertainment, business, and philanthropy with the shared mission to raise critical funding for New Yorkers living in poverty, and to lead the way for New York City’s next great comeback. 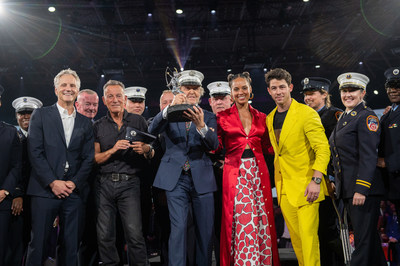 Hosted by Cecily Strong, the benefit featured a show-stopping concert by The Jonas Brothers and inspirational tributes and performances by Alicia Keys, Bruce Springsteen, Paul McCartney, and more. To further underscore the meaning of the evening, the benefit took place on the 20th anniversary of the historic Concert for New York City, which raised over $35 million for Robin Hood’s Relief Fund for the survivors and families of the terrorist attacks that took place on September 11, 2001.

“Robin Hood was founded 33 years ago to help elevate New Yorkers in need from poverty. Exactly twenty years ago last night, we came together for the Concert for New York City, and we saw New Yorkers’ willingness to help their neighbors when they needed it most. We did it after Superstorm Sandy, and right now our city needs us again because too many New Yorkers are still hurting and being left behind,” said Paul Tudor Jones, Robin hood co-founder and board member. “New York is the greatest city in the world and we are determined to make its promise of opportunity a reality for everyone by getting families back on their feet, kids back on track and helping New Yorkers to get back to work. New York’s comeback can more inclusive than ever before. We are grateful to every donor, guest, and performer last night.”

100% of the funds raised at the benefit will be invested in the most impactful poverty-fighting programs across all five boroughs specifically aimed at three critical goals:

“Robin Hood is leading the fight against poverty in New York City and our work is more consequential than ever before. As someone who grew up in this city and spent my career working with communities who lacked the same opportunities, I recognize that we are facing an exceptional challenge. Despite poverty rates dropping nationwide, poverty in our city is on the rise. Our kids are finally back in the classroom, but nearly half of the more than one million students in our city are performing below grade level. Our unemployment rate is double the national average and millions of New Yorkers still cannot afford to pay their rent or put food on the table,” said Robin Hood’s Chief Executive Officer, Richard R. Buery, Jr. “I am so grateful to the incredibly talented Alicia Keys, Paul McCartney, Bruce Springsteen, and the Jonas Brothers for coming together for our fellow New Yorkers, and for every donor who continues to support the fight against poverty in New York City.”

Among the other special highlights of the evening:

To request additional information on Robin Hood’s fight against poverty or to donate, please visit www.robinhood.org.

Hi-res images can be found here:

About Robin Hood:
Robin Hood has been fighting poverty in New York City since 1988. Because Robin Hood’s board covers all overhead, 100% of every donation goes directly to the poverty fight. Last year, Robin Hood awarded $172 million in grants, filling a critical void during the COVID-19 pandemic by providing cash assistance, meals, housing, healthcare, education, and other urgent needs to one million New Yorkers impacted by COVID-19, as well as funding an array of programs and initiatives developed to elevate families out of poverty in New York City. Follow the organization on Twitter @RobinHoodNYC and learn more at www.robinhood.org.