LOS ANGELES, April 28, 2022 /PRNewswire/ — Rising Los Angeles Mayoral Candidate Ramit Varma has spoken out after it was announced that he would not be included in the main mayoral debate occurring on May 1st at California State University Los Angeles. 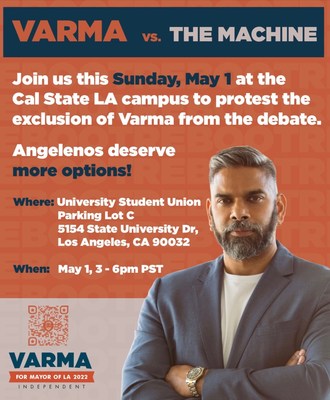 Meeting with debate organizers, Varma called into question the institute’s perspectives on who should be included in the debate itself. Many of the metrics for inclusion are subjective and, in objective measures such as polling and fundraising, Varma emerges at the top of the list.

Of the news that he was not invited to the debate, Varma laid out the criteria for participation.

“Only 1 has any subjectivity to it – and that one has the 4 parts outlined below. If you’ll indulge me, I’d like to give you my thoughts on each one…

1      Media Exposure – Media exposure is massively biased toward ‘insider candidates’. Using media appearances to determine who gets media appearances is literally the definition of structural bias.The entire foundation of the social justice movement is based on the idea that this kind of reasoning is flawed.  (eg- women are underrepresented on corporate boards because they don’t have corporate board experience)
2      Fundraising – Including the $2.5M contribution that I will placing, my fundraising total is over $4M. That puts me in second place behind only Caruso.  It puts me ahead of Bass and miles ahead of anyone else in the race. The fact that it is a personal contribution shouldn’t matter – as it hasn’t mattered that Caruso’s entire war chest is from his personal contribution.
3      Polling – According to the latest poll (with a +- 3.5 point margin of error) I am statistically dead even with Feuer and Buscaino. So you have Caruso / Bass, a distant third in De Leon, and then everyone else.
4      Endorsements – Firstly, endorsements are another category biased toward the ‘insiders’. Of course the entrenched special interests will favor entrenched candidates.

In conclusion, on the only indisputable metric (fundraising) I am number 2. I am statistically even with 2 of the 5 candidates on the other quantitative metric (polling) and I am systemically disadvantaged on the other 2 (media and endorsements). I think this definitely warrants inclusion in the debate. Ultimately, the League of Women Voters was created to help prevent a male dominated hierarchy. I can’t imagine their mission is to replace that with another biased system.”

Over the weekend, Varma contributed an additional $2.5M to his campaign. The total fundraise is now over $4M. This puts Varma at #2 (in fundraising) with a sizable lead over Bass.

In a further statement, Varma comments: “I want to live in a city, and a country and a society where ideas and energy rule the day – not favoritism and political expediency. I understand that there will be some work to include me in the debate. And I understand that the simplest and most expedient course is to leave the debate as is. But what is the real downside of including me? That 6 candidates will share 90 minutes instead of 5? That’s 15 minutes per person on average as opposed to 18. That one more podium would need to be set up on stage? Ultimately, the challenges are relatively trivial compared to the magnitude of the statement that the debate is truly inclusive and fair – that the public would be able to see a candidate who is not a Democrat, who is of a different generation, and who is a true outsider. The committee has the opportunity to do something important and positive for the city, for the electorate and for all those people who are so discouraged by the idea of local politics that they throw up their hands and ask to be left alone.”

It remains vital for Varma to be included in this debate in the name of a fair democratic election truly for everyone in Los Angeles.

You might’ve seen the billboards or advertisements around the city, but you really need to feel Varma‘s energy when he speaks aloud. Above all, he loves Los Angeles, resides here with his wife and kids, and believes in its potential to be the greatest city in the not only the U.S., but the world.

So, his platform is simple and focused on three core pillars—Homelessness, Affordability, and Public Safety. If elected mayor, Varma will “Reboot LA“ by helping people get off the streets, fighting to decrease the cost of living, and holding politicians accountable.

Varma is running as an independent without ties to any political party or special interest as these problems affect everyone and demand a non-partisan solution.

Be sure to meet him at his next event to be announced soon. He’s a New Kind of Mayor.

As the son of immigrants, the value of opportunity was never lost on Ramit — just as his father came to the US to build a better life for himself and his family, Ramit came to Los Angeles to do the same. After receiving his MBA from UCLA, he co-founded Revolution Prep, an online tutoring platform dedicated to making tutoring more effective and higher education more attainable for America’s youth. He built a company from the ground up centered around giving kids and young adults more opportunities to succeed in life.

Ramit is running for Mayor of Los Angeles because he loves this city. He lives here with his wife and kids and knows first-hand its potential as the greatest city in the world. Like every other Angeleno, however, he has seen that potential become clouded by instability and lawlessness. Varma is running as an Independent and is not tied to any political party or any special interest. He believes the issues our city is facing are non partisan and we need a non partisan leader who will approach things with practicality, rationality, and empathy.