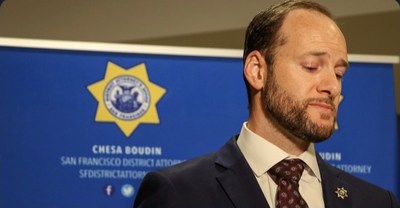 “Chesa Boudin has a dismal track record leading the District Attorney’s office; it’s a farce, with no improvement on the horizon. He’s had no previous experience prosecuting crime, and it clearly shows. While crime continues its grip on San Francisco hitting residents, businesses and tourists, Boudin books TV and radio interviews and personal appearances; he’s bought television and social media ads to counter the recall message with his mass disinformation campaign.”

“Boudin feebly attempts to refute allegations of misconduct, his lack of fitness for the job and his giving cover to drug dealers. He’s facing heavy criticism from his former colleagues. He fabricates and manipulates statistics, cites recent, trite accomplishments as if a major breakthrough. As expected, he labels those critical of him “liars” and “racists”, smears and slanders the recall effort’s proponents and major donors. His sole support comes from San Francisco’s farthest left-wing organizations and public officials. The deep chasm between Chesa Boudin’s radical leadership and the vast majority of voters has been exposed.”

The recall of Chesa Boudin has been designated as “Proposition H” on this June 7th ballot. The committee’s website is RecallChesaBoudin.org