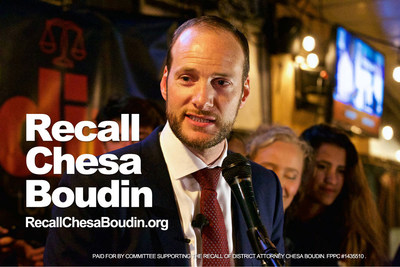 “San Francisco is united in moving forward with this important statement, that dereliction of duties to law-abiding citizens will no longer be tolerated,” says committee spokesman Richie Greenberg. “Mr. Boudin’s failure to prosecute crimes and protect our city has made every resident, every business owner and every visitor to our town a target.”

Eroded public safety has become a major problem in San Francisco. According to a February, 2021 study from the risk assessment app Augurisk Now, San Francisco has three of the top ten most dangerous neighborhoods in the United States.

In addition to inviting residents to join the recall effort, the committee is calling on San Francisco’s leaders, including Mayor London Breed and each of the eleven members of the Board of Supervisors, as well as former city officials, to participate in the movement with a statement of support.

“We especially want supervisors to stand with San Franciscans who deserve a safer, more just city. All elected officials, present and past, should stand in solidarity with the community to demand that Mr. Boudin resign immediately. For the good of our city, he must go.”

The Committee Supporting the Recall of District Attorney Chesa Boudin leads the recall effort, with website at https://RecallChesaBoudin.org.