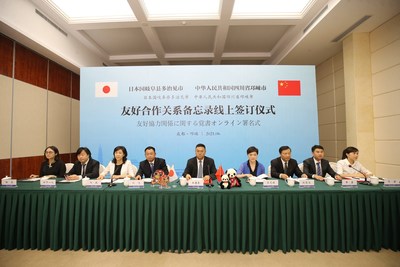 A business cooperation framework agreement was also signed between business organizations from the two cities.

Qionglai started official friendly exchanges with Tajimi in 2018, when the two cities were recommended to each other by the Chinese People’s Association for Friendship with Foreign Countries (CPAFFC).

The friendship between the two cities has strengthened in recent years as they went through a series of major events together, including ceramic culture exchanges, COVID-19 epidemic prevention and control efforts, the 80th anniversary of the founding of Tajimi city, and the Chengdu Tianfu Land Art Season.

Wang Dezhang, mayor of Qionglai, said there is much potential for friendly exchanges between Qionglai and Tajimi, as Chengdu is actively promoting a demonstration project for opening-up and cooperation in the urban construction and modern service industries jointly initiated by China and Japan, and implementing the spirit of the eighth China-Japan-ROK leaders’ meeting held in Chengdu in 2019.

“I believe that the signing of the MOU will help promote cooperation in multiple fields between the two cities and will benefit the people of Qionglai and Tajimi, helping them create a happier and better life,” Wang said.

Furugawa Masanori, mayor of Tajimi, expressed his gratitude to Qionglai for its generous donation of masks during the COVID-19 epidemic, and his expectation for the establishment of a Sino-Japanese painted porcelain exhibition hall in the Qionglai Museum.

He said the establishment of friendly cooperative ties has laid solid foundation for the two cities to deepen exchange in various fields such as culture, trade, and education.

Zhu Dan, director of the cultural exchange department of CPAFFC, said the signing of the MOU will not only promote comprehensive and multi-field exchange and cooperation between the two cities, but will also play a positive role in exchange and mutual learning between the Chinese and Japanese civilizations.

Liu Xiaojun, consul general of China in Nagoya, said he hopes that the two cities will actively expand the breadth and depth of bilateral exchange and cooperation to benefit the people of the two places while contributing to friendly exchange between China and Japan.