WHISTLER, BC, May 18, 2022 /CNW/ – Unifor is encouraged that the employer has agreed to meet again with a mediator to negotiate an end to the 15-week-old job action at PW Transit in Squamish, Whistler, and Pemberton. 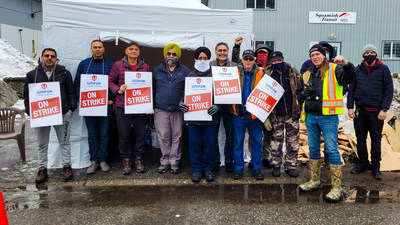 “Mediation in the context of free collective bargaining is how this dispute is going to be solved,” said Gavin McGarrigle, Unifor Western Regional Director. “We’re eager to get back to the bargaining table and find a resolution as soon as possible.”

In negotiations on May 11, 2022, B.C. Transit’s third-party contractor PW Transit rejected the union’s proposal for a roadmap to parity by converting a previously offered signing bonus into wages and adding a small adjustment to those wages in 2024, says Unifor. At the time, the employer also rejected meeting again with the mediator.

“Negotiations on May 11 moved the parties closer to a deal,” said McGarrigle. “I’m confident that, if the employer can creatively acknowledge a reasonable road map to wage parity during the life of the next agreement, we’ll have a deal.”

Both parties met independently with the Minister of Labour Harry Bains this week and the government has indicated that it has faith in the mediation process as already outlined. The minister has not appointed a “special mediator” with the associated restrictions as recently requested by the employer.