NEW YORK, April 27, 2022 /PRNewswire/ — PrizePicks, the pioneering operator of Single Player Fantasy (SPF) in North America, was named Fantasy & DFS Operator of the Year at 2022 EGR North America Awards Tuesday night at a ceremony in midtown Manhattan. The prestigious recognition highlighted a stellar night for PrizePicks, which also won the award for the Top Marketing Campaign of the Year. 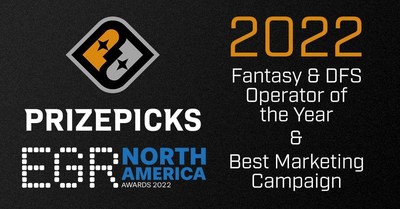 The Fantasy/DFS Operator award recognizes PrizePicks for standing out amongst its competition over the past year, during which the company has curated markets for over 50 different sports leagues, all while maintaining lean customer acquisition costs and premium unit economics. With an ever-expanding and diversifying landscape of entertainment choices, PrizePicks has excelled through the introduction of innovations such as its industry-leading esports offering, its one-of-its-kind flex play game format, and its recently-released hole-specific golf prediction product.

Tuesday night’s top fantasy honor also represented the second such award for PrizePicks in the last three months. In February, the Fantasy Sports & Gaming Association (FSGA) named PrizePicks Fantasy Sports Business of the Year. PrizePicks was named a 2022 Top Workplace by the Atlanta Journal-Constitution in March.

“We are honored to be recognized by EGR for our ability to operate a 24/7/365 fantasy sports business, innovatively acquire and retain customers, and consistently provide a six-star member experience, ” PrizePicks Co-Founder and CEO Adam Wexler said. “To be recognized not only for the strength of our offering but also the manner in which we engage our members reflects our ability to work seamlessly across departments and would not be possible without our collaborative, team-first company culture.”

That ability was represented by the other award bestowed to PrizePicks Tuesday night. The company’s streamlined and creative approach to growing and engaging its member base was rewarded with the Best Marketing Campaign prize. The company was cited for compelling affiliate content partners such as Kenny “King of the Fourth Quarter” Beechum and Trent “Book It with Trent” Attyah, and lighthearted promotional campaigns such as “Taco Tuesday.”

About PrizePicks
PrizePicks is the most fun, fast and simple version of daily fantasy sports covering a wide variety of sports leagues from the NFL & NBA to League of Legends & Counter-Strike. Centered around real money over/under predictions, PrizePicks allows sports fans to play against the numbers rather than each other. PrizePicks is currently the closest legal alternative to legal mobile sports betting in the majority of the United States including Top 10 markets like California, Texas, Florida & Georgia. With an existing digital footprint covering more than two-thirds of the U.S. population, PrizePicks is the most accessible type of game for the masses and has proudly paid out over $350 million in winnings over its lifetime. Headquartered in Atlanta, PrizePicks was recently recognized as the 2021 Fantasy Sports Business of the Year Award and for Best Product Experience from an Operator by the Fantasy Sports & Gaming Association. PrizePicks is available in the App Store and Google Play or at prizepicks.com.