Polis Etica: "It should be clear that everyone is actually interested in peace"

LONDON, Feb. 15, 2022 /PRNewswire/ — On February, 5 Italian “Canale” released a new talk show “Liberty Square” (Piazza Libertå) to discuss the current escalation in Ukraine and search for an answer to the question “qui bono”, or who is interested in the war. 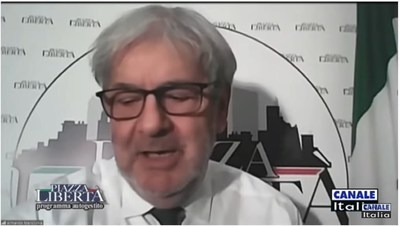 Senator Luigi Marini started off by recalling the first 2 presidential terms of the Russian President Putin, when he reestablished constructive cooperation and active trade between Russia and Europe. At the same time the relations with the USA have been troubled by NATO expansion towards the Russian borders, which was not supposed to take place according to the agreements of the late 1980s with Gorbachev. “That’s the problem of the problems” – the senator said, “As for the situation in Ukraine that is escalating, it started in 2014 when Yanukovich was thrown off in a coup-d’etat, and ever since the situation has been getting worse and worse. We see that Russia can not have such risks at its right next to borders. But the solution has to be political, not military”.

Stefano Vernole brought up the religious issue, that was also used to undermine the very foundations of Russian cultural ties, mentioning the cleavages of the Orthodox church, when Balkans and Ukraine would “no longer look at Moscow and would step away from their own cultural and spiritual historical ties”.

According to the experts, the rage against Russia has a goal of creation of an artificial “dangerous enemy” and return to the Cold War formats favorable for active weapon trade and military expansion, says Guido de Simone. Lack of unity within the EU is making the situation even more complicated.

Experts concluded, that external influence factors put aside, there is no actual reason for a war, and it should be clear that everyone is actually interested in peace. “Ukraine and half of Russia are a part of the same European space, they share the same culture”, – Leonardo Dini says.

The USA and Europe owe to Ukraine, Guido de Simone says, they should assist it in getting out of the trap it was pulled into due to the geopolitical reasons and outdated russophobic motifs.