ZURICH, Sept. 15, 2022 /PRNewswire/ — Plume®, the personalized communications services pioneer, last week completed its second annual #PlumeStrong Cycling Challenge, a demanding five-day ride through Switzerland, raising €217,000 with the help of its partners to ensure refugee children in Ukraine and Moldova can safely access education programs. Plume employees were joined on the 675-kilometer ride by some of their partners and two-time Tour de France Winner Tadej Pogačar. In exceeding its fundraising goal, #PlumeStrong will help fund safe spaces, called Inclusive Learning Hubs, for Ukrainian refugee children and Moldovan children to learn, play, and build friendships, and have a sense of normalcy despite the challenging circumstances of war.

#PlumeStrong is Plume’s corporate social impact program, committed to serving its global community by making a material impact across five pillars: Health & Wellness, Education & Equality, Planet & Climate, Science & Technology, and Security & Privacy. The inaugural 2021 #PlumeStrong Cycling Challenge started as an initiative to encourage Plume employees to stay mentally and physically healthy during the pandemic: 33 Plume employees cycled 680 kilometers through the Alps, raising $70,000. Plume donated 45 bicycles, helmets, and chains in Slovenia through the Slovenian Association of Friends of Youth, and almost $30,000 to the Ron Brown scholarship program.

This year, Plume opened up participation in its #PlumeStrong Cycling Challenge to partners to make an even greater difference in the lives of children. Plume selected Street Child to equip the Inclusive Learning Hubs in Ukraine and Moldova with much needed technology resources, including internet subscriptions, routers, and devices.

A recap video from the 2022 #PlumeStrong Cycling Challenge can be viewed here. Cumulatively our riders completed: 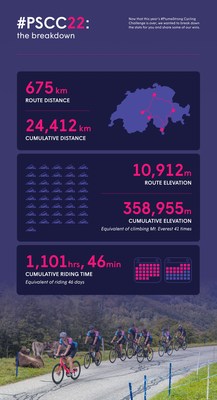 “The #PlumeStrong Cycling Challenge was a resounding success with the industry coming together to raise funds to help ensure children in Ukraine and Moldova can access online education, despite war and many other hardships. It’s on us as a technology community to help make a difference in their lives,” said Fahri Diner, Founder & CEO of Plume. “We were thrilled to have the incredibly successful professional cyclist Tadej Pogačar along for the ride. Equally committed to supporting the dreams of young people, he is an inspiration to us all.”

Last year, the 23-year-old Pogačar was the first cyclist since 2017 to win back-to-back Tour de France titles; he became the first to win at least three jerseys in consecutive Tours in nearly four decades.

“I’m a fan of Plume’s technology to help with my training as well as staying in touch with friends and family while I’m competing. Plus, we share similar values: a commitment to using our platforms to help others in need,” said Pogačar. “I was honored to ride alongside Plume employees for this year’s #PlumeStrong Cycling Challenge for such a worthy cause.”

Plume® is the creator of the world’s first SaaS experience platform for Communications Service Providers (CSPs) and their subscribers, deployed in more than 41 million active locations globally. As the only open and hardware-independent, cloud-controlled solution, Plume enables the rapid delivery of new services for smart homes, small businesses, and beyond at massive scale. On the front end, Plume delivers self-optimizing adaptive WiFi, cyber-security, access and parental controls, and more. CSPs get robust data- and AI-driven back-end applications for unprecedented visibility, insights, support, operations, and marketing. Plume leverages OpenSync™, an open-source framework that comes pre-integrated and supported on the leading silicon, CPE, and platform SDKs.

Plume and OpenSync are either trademarks or registered trademarks of Plume Design, Inc. Other company and product names are used for informational purposes only and may be trademarks of their respective owners.