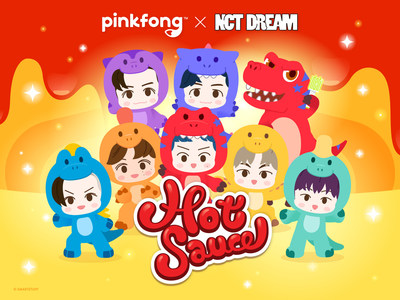 SmartStudy, the global entertainment company, releases NCT DREAM’s hit song ‘Hot Sauce’ in the style of Pinkfong, the beloved children’s brand behind the worldwide viral hit ‘Baby Shark’, on May 28th, 2021 at 7 p.m. KST (UTS +9). Along with the renewed song, the company delivers a colorful animated music video featuring the seven members of NCT DREAM and their adventure in Pinkfong’s dinosaur world.

The Pinkfong version of ‘Hot Sauce’ arrived after NCT DREAM released their cover of Pinkfong’s ‘Dinosaurs A to Z’. The video immediately became a sensation, amassing 10 million YouTube views within two weeks and topping Twitter Trending Topics in Southeast Asia on the day of its release.

“Together with NCT DREAM, we’ve created a special gift for all families and fans out there, regardless of age,” said Min Seok Kim, CEO, SmartStudy. “We’re always looking to create opportunities where we can bring joy to our fans around the world and across generations”.

“It was a pleasure to collaborate with Pinkfong, the flagship brand of SmartStudy, and present the new version of ‘Hot Sauce’ to the fans around the world,” said the members of NCT DREAM. “We hope that our fans will enjoy this new content featuring Pinkfong’s adorable dinosaur character and the 2D characters of NCT DREAM newly introduced through this collaboration”.

Launched in Korean and English, the full version of the video will premiere on Pinkfong’s Korean and English YouTube channels and NCT DREAM’s official YouTube channels on May 28th at 7 p.m. KST (UTS +9). In addition, special merchandise based on the animated characters of NCT DREAM’s members wearing Pinkfong’s dinosaur costumes will be available from the middle of June 2021 on online and offline channels.

Founded in June 2010, SmartStudy is a global entertainment company moving beyond the limits of platforms to create original content across children’s education, games and animation. Through SmartStudy’s beloved children’s brand, Pinkfong, the company produces modern-day songs and stories to provide stimulating, fun, learning experiences to children.

Pinkfong is a global entertainment brand that creates award-winning kids’ content for families around the world. Pinkfong has over 5,000 songs and stories within its vast library of children’s content, which can be accessed on the App Store and Google Play, as well as on YouTube and Amazon Video. Pinkfong’s accolades include the Amazon Video Direct Star, YouTube’s Diamond Play Button and Google Play’s Best Family App of 2014-2017.