NEW YORK, Oct. 13, 2022 /PRNewswire/ — #THIRSTYFORMORE – Today, Pepsi has dropped its most exciting football film to date, ‘Nutmeg Royale‘. Centered around the beautiful game’s craftiest move, the carbonated-drink giant has tapped into its incomparable and proven ability to seamlessly bring the worlds of football culture and entertainment together to deliver an action-packed, star-studded campaign under its new international tagline ‘Thirsty For More’. 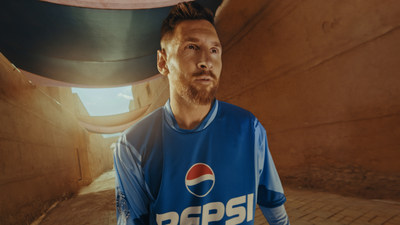 Leading with an epic hero film, fans can see the world’s all time football great and seven time Ballon D’Or winner – Leo Messi – alongside iconic players – Paul Pogba and Ronaldinho – take part in their toughest match to date. Outwitting each other, as well as unsuspecting locals alike, the elite football stars battle it out in a sensationally entertaining nutmeg tournament. The fast-paced action movie-style ad is packed with cameos, trick shots and Pepsi’s signature humour, all to one of the most iconic football soundtracks of Fatboy Slim’s infectious ‘The Rockafeller Skank’. Adding to the legendary line-up, football influencers Luva de Pedreiro and Kaljit Atwal can also be spotted showcasing their trademark skills. As part of its new international tagline ‘Thirsty for More’ Pepsi is championing the ambition of ‘Generation Thirsty’ – a tribe of individuals with a curious mindset – by shining a light on the next generation of amazing talent, making Luva and Kaljit the perfect fit for the brand.

In ‘Nutmeg Royale’ everything and everyone is a target. A trick reserved for the risk-takers who are thirsty for the rush of the game, the nutmeg requires confidence, skill and impeccable timing. It’s more than just a move on the pitch, it’s a mindset. Directed by Ernest Desumbila, Barcelona’s multi award-winning filmmaker, the ‘Nutmeg Royale’ film is layered with football culture references from start to finish, highlighting the universality of the much-adored game, and the intersection of the sport with popular culture – which Pepsi has long been at the forefront of.

The gripping creative is kick-started by all-time GOAT Leo Messi getting distracted by nothing less than Pepsi’s great tasting cola in the heat of the day. The distraction moment acts as the catalyst for the nutmeg royale battle which ensues, and the unexpected football fun kick-started by the global football stars grabs the attention of everyone from local passersby to news channels around the world. Even social media can be seen going haywire with reputable football journalist and influencer Fabrizio Romano telling the world about the fast footwork on his platforms! Pogba and Ronaldinho both make their skills clear to secure their places on the nutmeg leaderboard in the showdown, which is delivered with the voice of iconic sport commentator Peter Drury as – he too – cannot believe what he is witnessing. With the streets abuzz with the action of the battle, an unexpected nutmegged ball flies through the sky, and is met by the humble hoofs of Horsinho the Horse who, not one to miss out, gets in on action and excels in the art of nutmegging. The film comes to a dramatic close with one final nutmeg ‘goal’ – be sure to watch closely to see who is crowned the ‘Nutmeg Royale’ winner.

Speaking on the new campaign, Pepsi’s Senior Director, Global Marketing, Gustavo Reyna said: “We are so excited to share the ‘Nutmeg Royale’ football film with the world, as it is a true celebration of what Pepsi does best – have fun.  When we decided to create this campaign, we knew the nutmeg was the perfect move to showcase.  A nutmeg move is for the quick-witted, the ambitious, and fun-lovers that are thirsty for the thrill of the game. Creating entertaining moments for our consumers to enjoy is at the core of who we are at Pepsi. It’s this unexpected fun that we really wanted to shine through in everything we do. With this film and the upcoming moments we have planned, we’ve done just that!”

With an archive bursting with football entertainment, ‘Nutmeg Royale’ goes above and beyond to deliver entertainment to fans of all ages. From the widely-recognized hit song ‘The Rockafeller Skank’ being the film’s epic soundtrack, to the retro video game motifs, the ad is peppered with pop-culture references that bring to life the universality of the game. Fans may also recognize the jersey worn by players, which pays homage to the iconic 2002 Pepsi football jersey, which is a nod to the brand’s long and unparalleled impact on football culture. Fans watching closely may notice a hidden code they need to scan to be in with a chance of getting their hands on an exciting new launch from Pepsi, set to drop in the coming weeks too.

‘Nutmeg Royale’ is the first campaign to come under Pepsi’s new international brand campaign ‘Thirsty for More’ which launched earlier this month. ‘Thirsty For More’ is a shared mindset between the brand and its consumers and celebrates and rewards those who pursue their curiosity to experience the exciting and unexpected. ‘Thirsty For More’ will come to life through a range of experiences and content across purpose, products, passions such as football and music.

Stay tuned for more exciting drops and digital content including high voltage Tik Tok duet videos and delicious product innovations from Pepsi in the coming weeks that you will not want to miss! Fans can join the conversation online by following #THIRSTYFORMORE, #PepsiNutmeg and @PepsiGlobal.

Leo Messi: “It’s great to be back working with Pepsi and creating entertaining football moments for fans. I had a lot of fun shooting this campaign – it’s highly-energetic and allowed me to showcase one of my favorite football skills – the nutmeg!”

Paul Pogba: “This is one of my favorite Pepsi campaigns that I’ve worked on yet! Everything is centered around the nutmeg football trick, which is cool and fun – two things I’m all about. If you are Thirsty for greatness, you have to take risks. This film is for the everyone with that Thirsty mindset, ready to play hard and make exciting things happen!”

Ronaldinho: “I always have a great time working with Pepsi and wearing that iconic blue jersey. I know fans will love this new campaign, and I can’t wait for them to see the upcoming nutmeg activity we have planned too!”

PepsiCo products are enjoyed by consumers more than one billion times a day in more than 200 countries and territories around the world. PepsiCo generated more than $79 billion in net revenue in 2021, driven by a complementary beverage and convenient foods portfolio that includes Lay’s, Doritos, Cheetos, Gatorade, Pepsi-Cola, Mountain Dew, Quaker, and SodaStream. PepsiCo’s product portfolio includes a wide range of enjoyable foods and beverages, including many iconic brands that generate more than $1 billion each in estimated annual retail sales.

Guiding PepsiCo is our vision to Be the Global Leader in Beverages and Convenient Foods by Winning with PepsiCo Positive (pep+). pep+ is our strategic end-to-end transformation that puts sustainability and human capital at the center of how we will create value and growth by operating within planetary boundaries and inspiring positive change for planet and people. For more information, visit www.pepsico.com, and follow on Twitter, Instagram, Facebook, and LinkedIn @PepsiCo.