TORONTO, March 2, 2021 /CNW/ – The Ottawa Police Service has been named as the recipient of the 2020 Code of Silence Award for Outstanding Achievement in Government Secrecy in the law enforcement category. 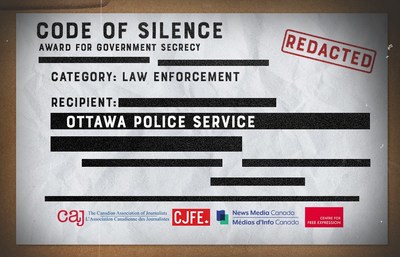 The Ottawa Police Service (OPS) is being recognized for its complete and utter violation of both the spirit and intent of Freedom of Information legislation. As reported in The Ottawa Citizen, a grieving family applied to the Ottawa Police Service, under Ontario’s Freedom of Information law, for a copy of an “accident reconstruction report” that could have helped explain to them why a family member died tragically in a pedestrian road incident.

The OPS acknowledged the report was available, but would only release it to the family if they paid a fee of nearly $2,500. The reason reported for this exorbitant fee was not to process and compile the report but for the OPS to recoup the cost of creating a report that was required in the normal course of their investigation.

“This case is an absolute travesty of the freedom of information system,” said James Turk, director of the Centre for Free Expression at Ryerson University.

“Having a police force attempt to pass on the costs of conducting an investigation, which they were already obliged to do, to a grieving family is beyond the pale. It really makes me question who the police force is working to serve.”

The intent of the awards is to call public attention to government or publicly funded agencies that work hard to hide information to which the public has a right under access to information legislation.

The 2020 Code of Silence Awards have also recognized:

Nominations for next year’s Code of Silence Awards can be made until October 30, 2021, by completing the nomination form available here.