APOPKA, Fla., June 15, 2022 /PRNewswire/ — Apopka candidate for Orange County Commissioner District 2 and local community sponsor Chris Delgado will be sponsoring a Father’s Day event for area residents on Sunday, June 19th, 2022, at the Orlando Baptist Temple. Open to the public, Delgado’s Family Field Day with Fathers will be held from 2pm – 5pm and include free food, free entertainment and sports activities for all ages. The event kicks off the Orange County Commissioner candidate’s 2022 “Community First” campaign. All members of the Orange County community are invited. Families without fathers are encouraged to join. 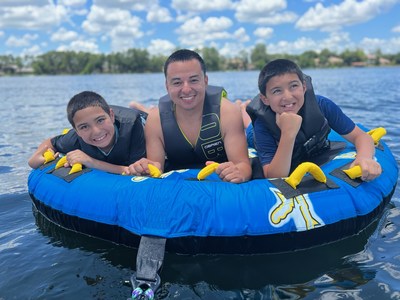 “Our community needs more events and activities that bring Orange County together and put the community first,” said Delgado. “I am more than happy to sponsor the annual Family Field Day with Fathers event with this in mind.”

Delgado has seen firsthand the role that fathers, and father figures can bring to the lives and wellbeing of children. A first generation Mexican-American, he was born to a single mother. The two shared a small apartment with his mother’s high school friend before moving to a trailer 100 yards from the I-10 highway in California, where they lived for several years. When the Apopka commissioner candidate was age six, his mother married, and Delgado gained a loving step-father. With a father in his life, Delgado became more motivated, secure, loved and learned the values he needed to become a successful contributing person to society.

Delgado announced his intent to run for Orange County Commissioner in early June 2022 and has officially qualified to be on the ballot for the primary taking place on August 23rd, 2022. A longtime, prominent entrepreneur and local community sponsor, he has played a dynamic part in the region across commerce, the city, and community. His “Community First” campaign focus puts priority and importance on area residents and brings much-needed community representation to the city’s leadership.

“I have seen the powerful impact fathers and step-fathers can have on kids, and the incredible result of bringing families together,” added Delgado. “In many ways, strong communities and strong community leadership are very similar. Everyone benefits.”

In addition to free admission, food and entertainment, Family Field Day with Fathers will include bounce houses, water games, father and son/daughter activities, and more. The event will be held at 4400 N. Powers Drive, Orlando.

Chris Delgado is an Apopka, Florida business owner, philanthropist and community sponsor. He has been the founder and chief executive of several successful businesses in the region, as well as served in many executive and charitable roles. He is also the founder of Orlando Gives, an annual initiative to provide low-income families financial support during the Christmas holiday season.