·  To celebrate the partnership in the region, OPPO announced raffle draw for customers who purchased any smartphone from the Reno6 series, with prizes including smartphones, ICC tickets and more 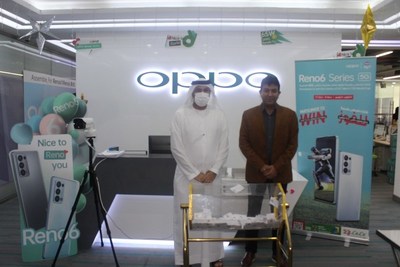 To celebrate the occasion, OPPO, offered customers the opportunity to participate in a raffle draw to win multiple prizes when they purchased any smartphone from the newly launched Reno6 series. In conjunction with participating stockists, customers entered the raffle draw with winners announced on 11th November 2021 across owned social media channels. Prizes included ICC tickets to the final and semifinal, a Reno6 Pro 5G, OPPO Enco Buds and OPPO Band.

The ICC Men’s T20 World Cup 2021 was the largest cricket event to be held in the region and will see sixteen of the world’s top cricket teams that will compete for the ultimate prize at the tournament. In the run-up to the tournament, OPPO announced a special offer on Reno6 series smartphones valid only during the tournament, as well as launching the exciting raffle draw at key retail partners store to boost the fervor brought by ICC. In addition, superfans visiting the Dubai International Stadium had the chance to enter the OPPO Reno6 stand, to experience the newest smartphone series that debuted in September 2021.

OPPO is a leading global technology brand since 2004, dedicated to providing products that seamlessly combines art and innovative technology.

OPPO is on a mission to building a multiple-access smart device ecosystem for the era of intelligent connectivity. The smartphone devices have simply been a gateway for OPPO to deliver a diverse portfolio of smart and frontier technologies in hardware, software and system. In 2019, OPPO launched a $7 Billion US Dollar three-year investment plan in R&D to develop core technologies furthering design through technology.

OPPO is firmly pursuing the creation of the best technology products and technological artistry for global users. Based on the brand elements of leading, young and beautiful, OPPO dedicates to the mission of letting the extraordinary users enjoy the beauty of technology.

For the last 10 years, OPPO has focused on manufacturing smartphones with camera capabilities that are second to none. OPPO launched the first mobile phone, the Smile Phone, in 2008, which marked the launch of the brand’s epic journey in exploring and pioneering extraordinary technology. Over the years, OPPO has built a tradition of being number one, which became a reality through inventing the world’s first rotating camera smartphone way back in 2013, launching the world’s then thinnest smartphone in 2014, being the first to introduce 5X Zoom ‘Periscope’ camera technology and developing the first 5G commercial smartphone in Europe.

Today, OPPO was ranked as the number four smartphone brand globally. OPPO brings the aesthetics of technology of global consumers through the ColorOS system Experience, and Internet service like OPPO Cloud and OPPO+.

OPPO’s business covers 40 countries with over six research institutes and five R&D centers across the world, from San Francisco to Shenzhen. OPPO also opened an International Design Centre headquartered in London, driving cutting edge technology that will shape the future not only for smartphones but for intelligent connectivity.

OPPO started its journey in the Middle East and Africa (MEA) region in 2015 after setting up its regional office in Egypt. Following the immense success of the brand’s sales centre in Cairo in the first year, OPPO accelerated its expansion plan across the MEA region and inaugurated its country operations in the UAE in 2019. Now OPPO is physically present in more than 13 markets across the region, including Egypt, Algeria, Tunisia, Morocco, Bahrain, Saudi Arabia, Oman, Kuwait, Qatar, Kenya, Nigeria, South Africa and the Levant.

Within the last year, OPPO has started to adjust its product line in the Middle East region specifically. This has included the launch of its flagship OPPO Find X Series and the introduction of the OPPO Reno Series. OPPO will continue to evolve its local product line to offer more premium series to consumers in the region.

A forward-thinking international technology company, OPPO strives to be a sustainable company that contributes to a better world and have enacted positive change in every way possible through activating local community initiatives and humanitarian, charity campaigns.