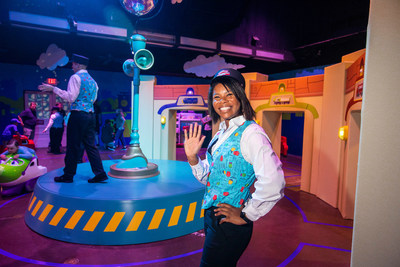 Daredevils beware as excitement has few limits with seventh generation circus royalty and king of the high-wire Nik Wallenda taking center stage. The famous Nik Wallenda returns to Silver Dollar City approximately a decade after his record-breaking stunt the Iron Jaw, when he dangled by his jaw from a helicopter 200 feet above Silver Dollar City. This time, the Wallenda family brings a variety of talent as they perform great feats in the new Nik Wallenda’s Zirkus, which is ‘circus’ in their native German language.  Created exclusively for Silver Dollar City, Nik Wallenda’s Zirkus showcases soaring acrobatics, aerial stunts, human pyramids, trick bicycling, and dangerous high-wire acts. The theme, says Wallenda, “The impossible is possible. We want to present an inspiring message that ‘I can do anything if I set my mind to it.’ We hope guests come to be impressed and leave inspired,” said Wallenda.

Younger guests take to the rails at the Chuggington Adventure Depot as they step into their very own trainee Chugger, chosen from the modern and colorful fleet of train engines. On the interactive adventure, a lively ‘Conductor’ helps guide the exploratory fun as kids travel through a free-play, wall-to-wall re-creation of the town of Chuggington, playfully prompting active participation like “follow the leader,” “chug backwards,” and “dance party.”‘  Preschoolers meet and dance along with their Chugger friends like Wilson, Brewster and Koko and explore favorite Chuggington locations including The Roundhouse, The Ice Cream Factory & The Repair Shed all from the popular, global series produced by Herschend Entertainment Studios.

“As the first of its kind, all new Chuggington Adventure Depot opens, we celebrate a collaboration between Herschend Entertainment Studios, specializing in content creation,  and Silver Dollar City, excelling in bringing colorful family fun to life,” said Natalie Setton, VP of Partnerships, Licensing and Content Distribution for Herschend Entertainment Studios.  “We’re so excited to see kids faces light up as they get to explore the World of Chuggington. This is our first opportunity to present the TV series in a powerfully imaginative way where the world of Chuggington comes to life for our fans, allowing them to create their own adventure with our beloved ‘Chuggers’.”

About Chuggington: Chuggington, enjoyed by train-loving preschoolers, is currently airing on A-list broadcast networks and key streaming platforms in over 100 countries.  Preschoolers can view the show on Hulu, DisneyNow and YouTube, where it has registered more than a billion views and has more than 1.3 million subscribers on its U.S. channel.  Produced and distributed globally by Herschend Entertainment Studios, Chuggington is an animated series set in the “traintastic” world of modern and colorful train engines. The series follows the humorous, educational and contemporary adventures of three young trainee engines: eager Wilson, daring Koko, and loyal Brewster, all of whom learn to ride the rails of life. The young trio of locomotives engage with a diverse cast of characters to learn important lessons, like teamwork, listening, perseverance, patience, self-confidence, and building friendship. For more information visit www.chuggington.com    Press contact: [email protected] or [email protected]

About Nik Wallenda: With 11 Guinness World Records and a list of never before seen death defying feats, Nik Wallenda has written his name in history as truly the “King of the High Wire”.  Nik has performed live in every state in the USA and all over the world.  He has garnered the support from tens of millions of live viewers in network television specials on ABC, The Discovery Channel and others.  From crossing the Grand Canyon and Niagara Falls to walking blindfolded between two towers in Chicago, Nik personifies the Wallenda Family legacy of “Never Giving Up” and has time and time again proven that “Fear is a Liar.” www.nikwallenda.com