Ontario $15 minimum wage a step on path to living wages

TORONTO, Nov. 2, 2021 /CNW/ – New legislation to set a $15 minimum wage in Ontario will help the province’s lowest-paid workers and raise wages for thousands of Unifor members with minimum wage plus clauses in their collective agreements. 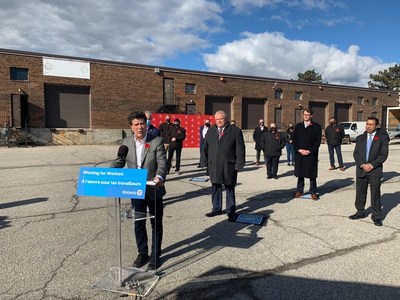 “Workers on the frontlines of our retail, wholesale, gaming, warehousing and broader service sectors who are paid a fraction of their worth will see this increase directly,” said Jerry Dias, Unifor National President. “I’m glad this government has reversed course and has now decided to raise workers’ wages.”

The provincial government announced legislation that would raise the minimum wage to $15 per hour on January 1, 2022, eliminate the lower rate for liquor servers, and adjust additional special minimum wages including student, homeworker, and hunting and fishing guides.

The proposed legislation stops short of a full reversal of the sweeping changes to labour laws that the Ford government passed using Bill 47 in 2018, including scrapping scheduled minimum wage increases and the elimination of paid sick days.

Thousands of Unifor members making above minimum wage will see a 4-4.5% wage increase because of the proposed legislation, including 7,000 retail grocery chain workers. This gain stems from Unifor’s groundbreaking collective agreements in retail and service sectors that include wage language tied to minimum wage, referred to as minimum wage plus.

“That provision, alone, will drive up wages of our members who work at many of the provinces’ largest retail store chains,” continued Dias. “Unifor bargains this language for members in sectors where workers are universally undervalued so that they always stay a step ahead when the minimum wage goes up. This $15 an hour promise will raise the floor, but Ontario can, and must do better to deliver living wages to all workers.”

A November 1, 2021 report by the Ontario Living Wage Network released an updated list of living wage thresholds in various regions of the province, ranging from $16.20 in London to $22.08 in Halton.