TORONTO, April 22, 2021 /CNW/ – To mark Earth Day, World Vision is calling on global leaders to fully respond to the climate change crisis as a tsunami of climate related disasters threaten to wipe out decades of development advances. The agency warns that the triple threat of climate change, conflict and COVID will push hundreds of millions of people into poverty and forced displacement without strong international commitments to mitigate impact, support adaptation and build resilience in the most at-risk communities. 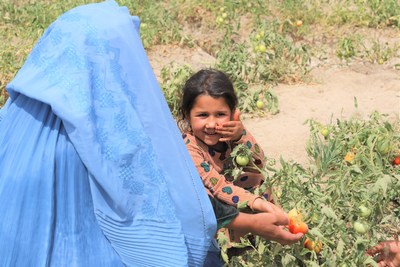 “Climate change threatens all of us, but the world’s poorest, who pollute the least, pay the highest price,” says Michael Messenger, President and CEO of World Vision Canada. “Climate change limits access to food and clean water for millions of people living on the world’s margins, while making them more vulnerable to natural disasters and disease. We will reverse decades of progress in reducing poverty and hunger without massive efforts to stop climate change.”

Nearly 24 million people were forced from their homes because of weather-related disasters in 2019 and approximately 100 hundred million more people will be pushed into extreme poverty over the next decade because of climate change, according to the World Bank.

“Climate change, ecological crises, land degradation and pollution have put all of us in grave danger,” says Tony Rinaudo, Senior Climate Action Advisor for World Vision and chief architect of Farmer Managed Natural Regeneration (FMNR), an innovative and cost-effective process that has restored more than 15 million hectares in West Africa alone. “Earth Day gives us an opportunity to pause and commit to a fresh start. We can reverse the damage done, to regreen barren land, grow more drought-resistant crops and apply green technologies. But we need to act now before it is too late.”

World Vision believes that climate change is a justice issue that exacerbates inequalities, especially amongst women, girls and boys. World Vision is calling on governments, corporations, and the international community to ensure climate action targets the most vulnerable communities and to support the full realization of global climate commitments established by the UN’s Decade of Ecosystem Restoration, Paris Agreement and Sendai Framework. This includes reducing global emissions, restoring deforested landscapes and building community resilience to both climate change and climate-related disasters. World Vision is calling for bold Canadian leadership to secure meaningful climate action at the Earth Day Summit.

How climate change impacts the most vulnerable:

World Vision is a relief, development and advocacy organization working to create lasting change in the lives of children, families and communities to overcome poverty and injustice. Inspired by our Christian values, World Vision is dedicated to working with the world’s most vulnerable people regardless of religion, race, ethnicity or gender. For more information, visit worldvision.ca or follow us on Twitter, Facebook, Instagram and LinkedIn.