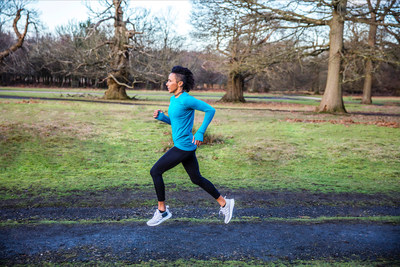 In partnership, Dame Kelly Holmes will work alongside NURVV Run as a global ambassador in a multi-faceted role. As well as promotional initiatives and events, Dame Kelly will be integrating the NURVV Run product into her personal training programme – providing direct feedback to NURVV to further enhance the product and its capabilities.

Dame Kelly Holmes is one of the finest athletes Britain has ever produced and her personal story is one of triumph over adversity, as her progression in running was continually hampered by physical and mental setbacks. On several occasions, Dame Kelly had to draw on considerable reserves of resolve and determination to carry on, overcome the setbacks and realise her dream.

The collaboration, which follows hot on the heels of NURVV Run’s partnership with England Athletics, embraces common ground – the themes of overcoming injury, a mindset of continuous improvement and the power of running on mental health – to inspire runners of all abilities to run healthier and to unlock their running potential.

Unlike other wearable technology, NURVV Run uses smart insoles with integrated pressure sensors to measure the most important aspects of running technique right from the source of action – the feet. Using biomechanical principles to analyse a runner’s data, NURVV Run provides unrivalled insights into each individual’s technique – including footstrike and pronation to help run faster, further and reduce injury risk.

Dame Kelly will be integrating NURVV Run into her run training as she continues to push her physical boundaries – supporting her to continue to run to her full potential, even though in retirement from competitive sport.

“In terms of running credibility, there’s not many to touch Dame Kelly, and we’re delighted to welcome her on board and join us in our mission to spread the word about the many benefits that NURVV Run provides runners in terms of running faster and further whilst reducing injury risk.

“Dame Kelly triumphed over her own struggles with injury throughout her career. It’s this experience alongside her enduring passion for the sport that makes her the perfect match for what we are trying to achieve at NURVV Run.

“This partnership together with the one we recently agreed with England Athletics, underlines the level of ambition we have for NURVV Run, and how important we believe our technology will be in improve running performance for runners.”

“I’ve been really impressed with NURVV Run and I can see how their innovative smart insole technology will help runners and coaches gain a huge amount of insight to facilitate coaching support and enhance performance. Knowledge really is power when it comes to training and in this respect NURVV Run is a game changer.

“I am looking forward to working alongside the NURVV Run team to promote running in general, as well as more specifically in the areas of utilising technology and biomechanics to help runners fulfil their true potential and promoting the benefits of running on mental health.”

NURVV is on a mission to provide runners with the power to understand what their bodies are truly capable of and find their true potential. We pioneer the latest advances in technology and biomechanics. We capture running from the point of action and analyze run-data using advanced biomechanics to deliver actionable insights and live in-run coaching. We are dedicated to all runners who want to improve their running and aim to change 10 million lives with a new way of knowing by 2025.

SCHAUMBURG, Ill., Feb. 26, 2021 /PRNewswire/ -- The Emergency Nurses Association on Friday praised the reintroduction of key legislation in the U.S. Senate and House of...