Nuna announces the opening of its first European flagship store in Florence, Italy

NEW YORK, Oct. 18, 2022 /PRNewswire/ — Nuna, a world leader in premium baby gear, has announced the opening of its first European flagship store in Florence, Italy. This new flagship location at, Via dei Pecori, 17, 50123 Firenze, Florence, Italy, is an important milestone for Nuna as it joins two other brick and mortar locations in Taipei and Tokyo. 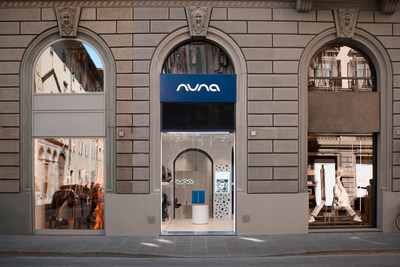 Since Nuna entered the Italian market, it has established itself as a leader in the region’s premium baby gear market.

Since Nuna entered the Italian market in 2018, it has established itself as a leader in the region’s premium baby gear market. And so, opening a flagship store here, in partnership with Ideal Bimbo, was a logical next step to the company’s growth ambitions.

Located in the historic, picturesque center of Florence, just a stone’s throw from the magnificent Duomo, Nuna’s flagship will provide Italian customers, as well as the region’s many tourists, the opportunity to step into the exclusive world of the Nuna brand, and see, touch, and feel its expertly crafted baby gear.

“We pride ourselves on being the most thoughtful baby brand in the world. What ensures our continued success is our brands foundational commitment to creating responsible, simple, and smart product. Italy’s multi-faceted embodiment of quality provides a best in-class opportunity for a memorable brand experience. Whether it’s food, fashion, or anything in-between Italy sets standards and trends globally. Making it a match made in heaven” said Austin Hodges, Chief Marketing Officer for Nuna.

Nuna embraces being premium in its minimalism and has remained true to its Dutch roots. Craftsmanship, clean lines, and thoughtful solutions remain at the forefront of each product. The iconic Nuna style is timeless while the features built into each product are inventive and expertly engineered – everything you need and nothing you don’t.

This new flagship store remains true to that sentiment, while adding a unique touch of Florence. As customers enter the store, they are greeted with four large arches framing the product selections in a museum style setting. There is nothing more important to Nuna than letting its expertly engineered products be the spotlight.

Visitors can expect to find the full range of Nuna displayed at the store, including car seats, baby carriers, pushchairs and in-home products. During the upcoming months, the store will feature Nuna’s limited-edition fashion collection designed by Italian designer, Georgette Polizzi, and crafted by Nuna, as well as its newly launched TRIV™ next pushchair.

A grand opening event was held September 21, 2022, that featured the theme, “Casa Nuna.” This idea originated from the desire to emphasize home, a place where family comes together. Besides being a reminder of one of Nuna’s core values, the concept of home was also referring to the reason for the event – the opening of Nuna’s first “home” in Italy.

The event kicked-off with a ribbon cutting ceremony with Brad Bickley, Nuna Global President, Guido Voigt, Brand Business President Italy, and Maurizio Pantani, owner of Ideal Bimbo. Guests then had the opportunity to explore the store. Afterwards, a marching band led them to the 2nd location at Palazzo Pucci, one of Florence’s most important historic residences. Here, an illuminated presentation of Nuna products, music with well-known DJ, Nora Bee, and violinist, Elsa Martignoni, entertained the guests and continued the celebration.

The “Casa Nuna” event was adorned with blue and white neon lights, which are Nuna’s distinctive brand colors. The white lights symbolized purity that is typical of childhood, while the color blue symbolized the harmony and calmness that can be found in a home.

Nuna, the global brand with Dutch roots, has been focusing on creating smart, helpful, and bold baby gear since 2007. First-hand experiences in parenthood show that practicality and beauty is the perfect balance when it comes to Nuna’s clever solutions that span across car seat, pushchair, in-home and on you categories. Inspired by the clean lines and ingenuity of Dutch design, the collection is as easy and flexible as new parents need it to be. With thoughtful design put into every detail, Nuna designs around your life.