DES PLAINES, Ill., March 1, 2022 /PRNewswire/ — Cities across the United States have experienced an unprecedented rise in auto thefts and carjackings in recent years. David Glawe, president and CEO of the National Insurance Crime Bureau (NICB), provided comprehensive expert testimony today before the U.S. Senate Committee on the Judiciary regarding this complex issue. 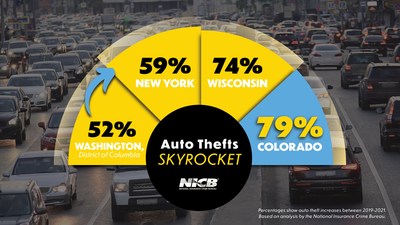 In his testimony, Glawe spoke on the staggering increase in auto thefts and carjackings plaguing many states and major cities throughout the United States, the apparent connection between auto thefts and carjackings and other serious violent crimes, and how NICB partners closely with federal and local law enforcement to resolve these cases. Glawe also provided lawmakers with concrete policy recommendations for them to consider in addressing the overarching problem.

“Vehicle theft and carjackings are serious offenses that warrant the attention of public officials and policymakers,” said Glawe, the former Under Secretary and Chief Intelligence Officer at the Department of Homeland Security and a 30-year law enforcement veteran. “The victims of thefts and carjackings are deserving of being vindicated and seeing that justice is served. And offenders should be held accountable for putting victims and their communities in harm’s way.”

“Many cities have cut police forces or slashed department funding in recent years,” said Glawe. “Drastically reducing police presence in communities across the country is not the answer. Whether through the federal COPS program or other measures, we need more community policing, not less.”

Additionally, Glawe stressed the need for state and local authorities to enforce the laws as written.

“In many jurisdictions, the law as written provides adequate penalties,” said Glawe. “However, certain enforcement or reform policies have effectively nullified these laws, thereby providing little disincentive for criminals to commit these serious offenses.”

NOTE: President and CEO David Glawe is available for interviews to discuss theft and crime issues.

REPORT FRAUD: Anyone with information concerning insurance fraud or vehicle theft can report it anonymously by calling toll-free 800.TEL.NICB (800.835.6422) or submitting a form on our website.

ABOUT THE NATIONAL INSURANCE CRIME BUREAU: Headquartered in Des Plaines, Ill., the NICB is the nation’s leading not-for-profit organization exclusively dedicated to combatting and preventing insurance crime through Intelligence, Analytics, and Operations; Education and Crime Prevention; and Strategy, Policy, and Advocacy. The NICB is supported by more than 1,200 property and casualty insurance companies and self-insured organizations. NICB member companies wrote over $530 billion in insurance premiums in 2020, or more than 82% of the nation’s property-casualty insurance. That includes more than 95% ($236 billion) of the nation’s personal auto insurance. To learn more, visit www.nicb.org.