NEW HAVEN, Conn., Sept. 22, 2021 /PRNewswire/ — Beginning October 1, 2021, The Blessed Michael McGivney Pilgrimage Center will display an online exhibition centering on the Knights of Columbus connection with baseball, which spans almost a century and a half. 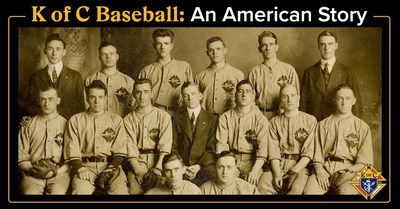 The game of baseball historically is known as America’s Pastime. It has been played professionally for more than a century and has produced events, players and venues that are enduring in American lore.

Beyond the fame and legend, however, is a less considered but significant dimension of the game. Baseball unites people. Whether at a professional ballpark, a community diamond or a church picnic, baseball brings people together in activity and in spirit.

Blessed Michael McGivney (1852-1890) realized this. He played the game as a seminarian and introduced it to others during his priesthood. Andrew Fowler has researched the Knights of Columbus founder’s attraction to baseball. Many who followed him shared his affection for the game. Some enjoyed it social and recreationally; others pursued it passionately, even to the Hall of Fame.

For the Knights of Columbus, the game served as an early avenue of assimilation for Catholic immigrants and firstgeneration Americans. Today, baseball continues to serve as a path toward spiritual bonds and friendship for Knights and their families. These values stem from Father McGivney, who founded the fraternal organization on the principles of charity and unity.

In a four-part series, Knights of Columbus Baseball: An American Story, Fowler recounts the unique, untold Catholic-American story of how the Knights of Columbus as an organization and individual Knights — including some of baseball’s mightiest heroes — stepped up to the plate to produce memorable moments and shape America’s Pastime for the better. The first segment, opening October 1, details Father McGivney’s personal experiences with the game and the appeal it had among the members of his fledgling organization.

Subsequent segments, to be introduced at key points during the 2022 Major League Baseball season, will explore the growth of the game as a professional sport and the chronicle developments during significant events in American and world history. Numerous photographs and illustrations enhance the presentation.

The presentation is free and online at michaelmcgivneycenter.org just in time for the MLB playoffs.

Judicial Recount Terminated in the Electoral District of Davenport

Judicial Recount Terminated in the Electoral District of Davenport