KOBE, Japan, April 13, 2022 /PRNewswire/ — ASICS is today announcing the results of its inaugural Global State of Mind Index, which proves a direct positive link between exercise and mental health, but uncovers the worrying potential impact of lower levels of activity in younger generations. 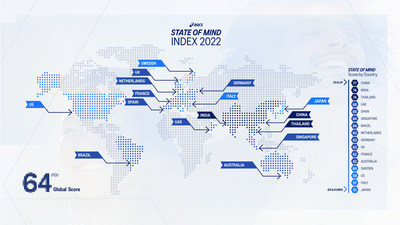 The first of its kind global study of 37,000 people, which included over 2,000 people from the UK, finds that people who move the most have a higher State of Mind score. Active individuals[1] have an average State of Mind score of 68/100, in relation to just 56/100 for those that are inactive[2].

The research also highlighted the dramatic difference in levels of physical activity between the opposing generations, finding that Baby Boomers were active on average for an extra 104 minutes per week when compared to the younger age group.

When looking at the reasons behind the dramatic difference in activity levels, almost three-quarters (72%) of Baby Boomers admitted to exercising specifically for their mental wellbeing, whilst over half (56%) of the Gen Z group admitted that they were too ‘time poor’, citing work and social commitment as the reasons for their lack of exercise.

The State of Mind study also interestingly found that while the global population perceive 30 minutes as the minimum amount of exercise required to experience the uplifting impact of movement, new ASICS’ research proves that just 15 minutes and 9 seconds of movement is all it can take to begin feeling the mood-boosting effects.

Dr Brendon Stubbs, a leading exercise and mental health researcher from King’s College London who led the study, said: “There is a common perception that you need to move for a long time to experience the uplifting benefit. However, our new research proves this is not the case – just over 15 minutes of movement is actually all it can take to experience the positive impact. Coinciding with the State of Mind Index, which demonstrates the positive link between movement and mental health on a global scale like never before, we hope it will be inspiring for many to see the impact that such a small amount of movement can have.”

Karen Guttridge, a 60-year-old ASICS FrontRunner, added: “Staying active as I age gives me the best chance of combatting degenerative illness and staying mobile and independent. Plus, it’s the best mood booster I know. Exercise is now less about the competitive element and has more of a fun focus; participation is more important than pace.”

Inspired by the 15:09 finding, ASICS now aims to get the world moving through its 15:09 Uplift Ambassadors – ASICS’ latest athlete signings with a difference. The club’s founding members – including retired US runner Deena Kastor, Japan’s former volleyball international Yuki Mori and Olympic marathon winner Mizuki Noguchi, Italy’s Olympic marathon champion Stefano Baldini, and the UK’s former 10,000 world champion Liz McColgan – are a celebration of the uplifted older generation’s approach to movement and exercise, as revealed by the State of Mind Index study results.

Gary Raucher, Executive Vice President, ASICS EMEA said: “At ASICS, it has long been our belief that sport has the power to uplift both an individual and the world like nothing else. While the results of our global State of Mind Index prove just how intrinsic the link between regular movement and positive mental health is, they also show the potential impact a small amount of movement could have in raising the world’s collective State of Mind score.”

To find out more visit https://www.asics.com/geo/mk/smsb-state-of-mind-index

About the ASICS State of Mind Index

The State of Mind Index is a first-of-its-kind study conducted by ASICS which looks at the relationship between State of Mind and exercise around the world. The State of Mind Index is a score out of 100, calculated based on the accumulative mean scores across ten cognitive and emotional traits – including positivity, content, relaxed, focused and composed. Conducted by Edelman Data & Insights, the study was carried out among a total sample size of 37,000 respondents across 16 countries globally – nationally representative by age, gender and region in each market. The countries included in the study are Australia, Brazil, China, France, Germany, India, Italy, Japan, Netherlands, Singapore, Spain, Sweden, Thailand, UAE, UK & USA. Generational breakdown included in the study was as follows:

Additional research:
Additional UK-specific research was carried out by One Poll between 4th – 8th April 2022 with a sample of 2,000 respondents aged 18-65+