NEOM appoints Founding President of its flagship university, NEOM U

NEOM, Saudi Arabia, June 23, 2022 /PRNewswire/ — NEOM, the sustainable regional development in northwest Saudi Arabia, announced today the appointment of Dr. Andreas Cangellaris as the Founding President of NEOM U – NEOM’s first university. Dr. Cangellaris is joining NEOM from the University of Illinois Urbana-Champaign, where he is the M. E. Van Valkenburg Professor in Electrical and Computer Engineering and has been serving as Vice-Chancellor for Academic Affairs and Provost since 2018. 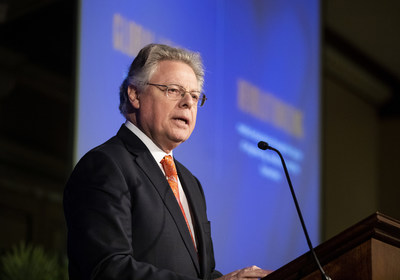 Education is central to the well-being of societies and the development of vibrant ecosystems. NEOM aims to establish a world-class Education, Research and Innovation (ERI) hub that empowers future generations while using technology to engender new ways of learning from early years on, through primary, secondary, post-secondary education and beyond. These goals support the transformation of Saudi Arabia’s educational sector. NEOM U, as one of the key pillars of NEOM’s vision for its education sector, will contribute to this endeavor by creating a nexus of innovation and knowledge that will attract students from all over the Kingdom and the world.

Dr. Cangellaris will lead the development of NEOM U on its journey to become a pre-eminent knowledge institution that supports NEOM’s vision as an innovation hub and a society enhanced by the opportunities of new technology. It will be a university without boundaries, leveraging next-generation educational technologies with both on-site and online learning. Its graduates will be known for digital/technological thinking and the ability to design innovative solutions in context. The development of NEOM’s different sectors will provide a unique living laboratory for immersive ERI. Initial academic and research programs will cover computer science, engineering and design, media, art and entertainment, as well as business. One common theme will be a CS+X undergraduate core curriculum rooted in the natural sciences, arts, humanities and social sciences.

Dr. Cangellaris has overseen the academic and research programs of a highly regarded US academic institution with over 50,000 students, 15 colleges and 150+ programs of study and in excess of USD 600 million in annual research expenditures. A distinguished scholar in the fields of computational electromagnetics and electronic design automation, he received his Bachelor of Science degree in Electrical Engineering from the University of Thessaloniki, Greece and his graduate degrees, a Master of Science and Ph.D., in Electrical Engineering from the University of California, Berkeley.

Commenting on the new appointment, Nadhmi Al-Nasr, CEO of NEOM, said: “Education is central to achieving NEOM’s vision and ambitious goals. I am delighted that we have attracted a person of the caliber of Dr. Cangellaris to lead one of the critical pillars of our education sector. NEOM U is our first step toward developing a postsecondary education that is accessible to all, attracting the brightest students from all over Kingdom and the world. We want it to be a differentiator and a powerful signal of NEOM’s commitment to pioneering ideas in a world inspired by innovation.”

Commenting on his appointment, Dr. Cangellaris said: “I am thrilled and honored to have been given the opportunity to be the Founding President of NEOM U, to help build it and to lead it in its quest to inspire, catalyze, foster and enable the positive change NEOM aspires to bring to the world. To change the world for the better, you need everyone to become a change agent. And this is what NEOM U will do, by bringing together learners from the Kingdom and the world in NEOM’s living laboratory and immersing them in the learning of how the deliberate, responsible, innovative use of technology can improve our world and the human condition.”

Dr. Jean-Lou Chameau, the chair of the International Steering Council (a council composed of world leaders in education and research that advise NEOM in matters pertaining to the Education, Research and Innovation sector), added, “Dr. Cangellaris, a distinguished scholar and teacher with extensive experience in academic leadership, brings a world-class perspective to NEOM U. The ISC and I were impressed by his vision and ideas for higher education and research:  He can drive NEOM U’s efforts to become a destination as a global university for the best scholars and students as well as foster new pathways to academic degrees.”

About NEOM
NEOM is an accelerator of human progress and a vision of what a New Future might look like. It is a region in northwest Saudi Arabia on the Red Sea being built from the ground up as a living laboratory – a place where entrepreneurship will chart the course for this New Future. It will be a destination and a home for people who dream big and want to be part of building a new model for exceptional livability, creating thriving businesses and reinventing environmental conservation.

NEOM will include hyperconnected, cognitive towns and cities, ports and enterprise zones, research centers, sports and entertainment venues and tourist destinations. As a hub for innovation, entrepreneurs, business leaders and companies will come to research, incubate and commercialize new technologies and enterprises in groundbreaking ways. Residents of NEOM will embody an international ethos and embrace a culture of exploration, risk-taking and diversity.

This material is distributed by Teneo Strategy LLC on behalf of NEOM Company. Additional information is available at the Department of Justice, Washington, DC. Life Time Appoints Donna Coallier to Board of Directors