WASHINGTON, Nov. 22, 2021 /PRNewswire/ — Last week on November 14, over 20 major cities throughout the United States, Europe, Australia, Canada, Argentina, and Kabul, Afghanistan, were met with thousands of protestors from nationalities of their respective countries, the Afghan diaspora, and Afghan refugees. Their uprising was an answer to a call of international uprising by their leader, Commander Ahmad Massoud of the National Resistance Front (NRF). 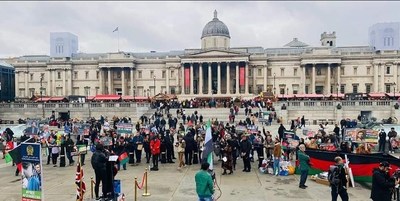 Earlier this month, Commander Ahmad Massoud stated: “Wherever you are, inside or outside, I call on you to begin an uprising for the dignity, freedom, and prosperity of our country.” The leader of the NRF went on to say that the people of the country, as well as the world community, should unite to combat the insurgent group.

The protests this previous week were organized by diaspora communities across the globe. Afghan diaspora from New York, Sweden, Sydney, Vancouver, Frankfurt, and Hamburg to name a few, organized their people and made their way to high visibility areas of their cities and states, determined to amplify the voice of their leader, Commander Ahmad Massoud, to the international community. Their aim was to spread awareness of his struggle against the Taliban and international terrorism. Their concern is the people of Afghanistan are determined and fighting to gain their freedom, but that the United Nations and governments are turning a blind eye allowing the Taliban to commit atrocities and genocide.

The protestors in unison, regardless of their geographic region, demanded the world provide international support for Commander Massoud, and reject the illegitimate government forced on them by terrorists.

Maihan Sarwary, a protest and community leader in Toronto, stated, “Commander Ahmad Massoud’s call for uprising gave us hope and helped invigorate a passion to continue to fight day in and day out. Protesting was a way to give people a voice. Protesting let the different cities feel the pain of Afghanistan. I implore the governments of the world and private citizens to stand for what is right. As Commander Ahmad Massoud is defending our rights and freedom, myself and many Afghans around the world continue to fight to ensure justice and peace is brought to Afghanistan.”

The activists fear that the gains made in the past two decades will be erased by the Taliban – vital gains such as freedom, democracy, and women’s rights. The Taliban are determined to erase women from visibility and society. Mariam Jabarkhel, a protestor in London, shared, “By joining the global NRF protests on the 14th of November 2021, I wanted to show solidarity with our brave Afghan women who have now been resisting for over three months on a daily basis. Our women of today are no longer the women of the ’90s – they have their brothers in the NRF to resist for them on the ground and fight for their freedom, but they also have their sisters in the diaspora to amplify their voices whilst theirs have been muted.”

Inside the country, the Resistance Front has taken route across all provinces and is rapidly expanding, thanks to the leadership and efforts of Commander Ahmad Massoud.

Head of Foreign Relations for the National Resistance Front of Afghanistan, Ali Maisam Nazary, stated: “This historic and momentous turnout around the globe has sent a clear message. The people see the National Resistance Front as the only viable solution to a free Afghanistan. We hope the United Nations and governments of the world hear their voices, and aid us in defending the freedom-loving people of Afghanistan.”