ATLANTA, May 28, 2021 /PRNewswire/ — Join the National ALS Registry in honoring baseball legend Lou Gehrig and raising awareness of the disease that bears his name. On June 2nd Major League Baseball (MLB) will celebrate the inaugural “Lou Gehrig Day” as a day to commemorate the life and legacy of Lou Gehrig. It is also a day to raise awareness of the importance of Amyotrophic Lateral Sclerosis (ALS) research in combating this devastating disease. ALS, which is commonly called “Lou Gehrig’s Disease” in the United States, is a neurodegenerative disease that strikes motor neurons and eventually leads to loss of control of voluntary muscles in the body. Currently, there are over 16,000 patients living with ALS in the U.S.

June 2nd has particular significance in Gehrig’s life because on this day in 1925, he officially entered the New York Yankee’s starting roster as first baseman.

After a year of waning physical strength and declining performance on the field, Gehrig was ultimately diagnosed with ALS at the Mayo Clinic on June 19, 1939 – his 36th birthday. Gehrig retired from the Yankees two days later. The Yankees honored Gehrig on July 4th with a “Lou Gehrig Appreciation Day” at Yankee Stadium. That day, Gehrig gave one of the most famous speeches in sports history. “For the past two weeks, you have been reading about a bad break,” he told the audience at Yankee Stadium. “Yet, today, I consider myself the luckiest man on the face of the Earth….”

Sadly, June 2nd also bears another significance in Gehrig’s life— it’s the day he passed away in 1941 after fighting ALS for 2 years. Now, June 2nd will not only be a day to forever celebrate Lou Gehrig in the records of baseball fame, but also a day to pay tribute to the estimated 5,000 people a year diagnosed with ALS in the United States.

The National ALS Registry, which is part of the Centers for Disease Control and Prevention (CDC) and the Agency for Toxic Substances and Disease Registry (ATSDR), honors Lou Gehrig and aims to help the search for a cure for the disease by collecting, managing, and analyzing data about people with ALS. Researchers use data in the Registry to look for disease patterns and try to find common causes or risk factors for developing ALS. As more people with ALS join the Registry, more data becomes available for researchers to study. The Registry also provides resources to the ALS community—for example, connecting people living with ALS with clinical trials and research studies.

To learn more about ALS and the work of the National ALS Registry, please visit cdc.gov/als 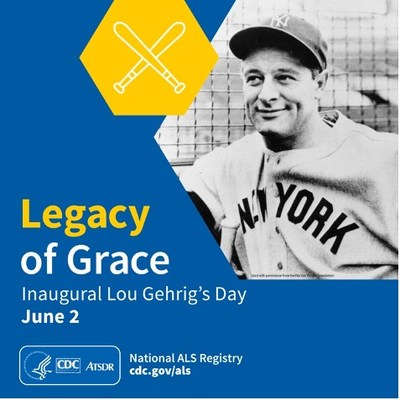