NEW YORK, Oct. 9, 2021 /PRNewswire/ — Moonbug today announced that a new character is joining the Blippi universe named Meekah. Meekah, played by actor Kaitlin Becker, is Blippi’s cartwheel-loving and kind-hearted best friend who lives next door. Together, they laugh, dance and learn about the world through adventures. She will appear on new episodes on Blippi’s YouTube channels, as well as the upcoming production Blippi’s Treehouse, coming to Amazon Kids+ later this year. 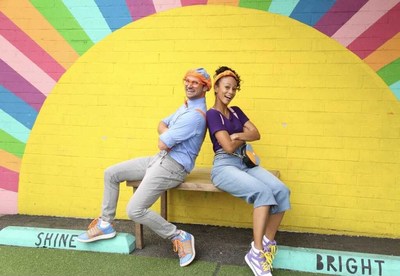 Meekah is Blippi’s best friend, who loves to sing and express herself through movement, and as his co-host on the show, accompanies him on his many learning adventures. She is always creating, making and experimenting, and encouraging her friends to “give it a whirl.” She is often thinking about how things work and can figure out how to make anything.

“Meekah spreads joy and curiosity wherever she goes — and couldn’t have found a better best friend in Blippi,” said Kaitlin Becker, the actor playing Meekah. “We’re all excited for more fans of the show to see themselves reflected in a program they love so much.”

“We can’t wait for families to get to know Blippi’s best friend Meekah, who shares in his contagious curiosity while also bringing new interests and activities to their adventures,” said Katelynn Heil, Moonbug’s general manager of Blippi. “Blippi’s stories are inclusive and universal, and Meekah is the perfect person to join him in that mission. Together, they will continue to inspire kids all around the world to get excited about learning new things.”

A trained psychologist, researcher and expert in educational children’s entertainment, Dr. Natascha Crandall has played a critical role in ensuring both the Blippi and Meekah characters are advancing the show’s learning goals.

“Blippi has always taken a playful approach to sparking curiosity among his youngest viewers. His connection with his audience serves as an anchor around which he is able to build learning elements,” said Dr. Natascha Crandall, Founder of Crandall Consulting, LLC. and the educational consultant for Blippi shows. “With the addition of his new friend, Meekah, kids will get the opportunity to see Blippi benefit from new ideas and perspectives, demonstrating how meaningful social connections can enhance play and wonder in new and exciting ways!”

Kaitlin Becker has a background in musical theatre and children’s entertainment and is best known for her work on NBC’s Sprout Network, where she was a host for Sunny Side Up and worked alongside puppets, animals and celebrities. A NYC-based actor originally from Kentucky, she graduated from Northern Kentucky University with a Bachelor of Fine Arts in Musical Theatre. She has acted in numerous theaters around the country, including a couple in the Big Apple, including the York, Ars Nova, The Wild Project and The Triad. She has a deep passion for music, improv, sketch comedy and television.

The news follows the recent launch of a new 3D animated series on YouTube, called Blippi Wonders. In the new cartoon show, the ever-curious Blippi sets off on comedic and fun adventures in his BlippiMobile along with his new, faithful sidekicks Tabbs and Fetch, who help him find the answers to his questions about the world, while making new friends along the way.

Blippi is a live action, educational children’s show for kids ages 2-6 years old. Through singing, dancing, and exploring, Blippi helps children understand the world around them by going on all kinds of learning adventures, from snowy hills to wildlife parks to museums. His appeal lies in his contagious curiosity evident in the way he looks at the world. He’s taught millions of kids how to count, colors, letters, and much more.

In the few years since the show was first created, Blippi has become the number one presenter-led kids show in the U.S. and one of the world’s most popular preschool entertainers, with more than one billion views per month on YouTube and over 30 million dedicated followers. Blippi content is available in eight different languages and on a range of streaming platforms, including HBO Max, LatAm, Spacetoons, Hulu, Amazon Kids Plus, Peacock, Virgin Media, Roku, FutureToday, Kidoodle and Sky Kids.

In just three years, it has become a kids programming powerhouse with a library of more than 550 hours of content, which is distributed on more than 100 platforms globally, including YouTube, Netflix, Hulu, Amazon Prime Video, Sky, Tencent, Youku and Roku. In May of 2020, Tubular Labs named Moonbug one of the leading digital kids’ entertainment companies in the world based on the total number of minutes watched worldwide.