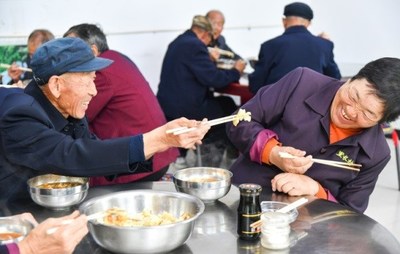 China first started pushing toward modernization when the Qing Dynasty (1644-1911) began crumbling in the mid-19th century. Today, the long-anticipated goal is firmly in sight.

“From this day forward, the central task of the Communist Party of China (CPC) will be to lead the Chinese people of all ethnic groups in a concerted effort to realize the Second Centenary Goal of building China into a great modern socialist country in all respects and to advance the rejuvenation of the Chinese nation on all fronts through a Chinese path to modernization,” Xi Jinping, General Secretary of the CPC Central Committee, said in a report to the 20th CPC National Congress on October 16.

The world’s most populous country now stands ready to embrace a modernization model with its own characteristics.

Chinese modernization is the modernization of a huge population, of common prosperity for all, of material and cultural-ethical advancement, of harmony between humanity and nature and of peaceful development, Xi elaborated.

The model contains elements common to the modernization processes of all countries, but it is more characterized with features unique to the Chinese context, Xi said.

With over 1.4 billion people, nearly 18 percent of the world population, China is home to more people than the existing countries that have achieved modernization combined. China’s modernization benefits everyone in the country. Its success in eradicating absolute poverty over the past years is a major step toward attaining a key goal of Chinese modernization: common prosperity.

In the meantime, ecological conservation features high on the modernization agenda. “Respecting, adapting to and protecting nature is essential to building China into a modern socialist country in all respects… We must remember to maintain harmony between humanity and nature when planning our development,” Xi said.

China has been active in participating in global environmental governance and international cooperation to address climate change and is working to peak its carbon dioxide emissions before 2030 and achieve carbon neutrality before 2060.

China adheres to the path of peaceful development while pursuing its modernization. Adham Sayed, a member of the Central Committee of the Communist Party of Lebanon, said that as today’s world is going through a phase of transformation and the global order is undergoing fundamental changes, humanity needs a clear plan, and an alternative world order based on addressing the world’s crises.

“China’s messages give hope to the people of the world that the future will be better, and that a strong China means a better world,” Sayed told Beijing Review.

The CPC aims to realize modernization in China to a large extent from 2020 through 2035; and build China into a great modern socialist country that is prosperous, strong, democratic, culturally advanced, harmonious and beautiful from 2035 through the middle of this century.

The CPC National Congress and the Central Committee it elects are the highest leading bodies of the Party.

Some 2,300 elected delegates attended the congress this year, including Party and government leaders, military officers and Party members from the primary level such as farmers, teachers and medical workers. Together, they represent more than 96 million CPC members and over 4.9 million primary-level Party organizations.

“We will encourage the people’s orderly participation in political affairs and guarantee their ability to engage in democratic elections, consultations, decision-making, management, and oversight in accordance with the law,” the report to the 20th CPC National Congress stated.