TORONTO, June 13, 2022 /CNW/ – The Ontario government has lost a second legal appeal, this time with the highest court in the province. The Ontario Court of Appeal decision released June 13, 2022, resoundingly and without hesitation upholds the Human Rights Tribunal of Ontario’s (HRTO) finding the government was responsible for discriminating against midwives and must take action to close the gender wage gap.

“The courts have spoken loud and clear… and three times in a row. Midwives call on the Ford government to act without delay to close the gender wage gap for midwives,” Jasmin Tecson, midwife and President of the AOM Board of Directors.

“Midwives have persevered through almost a decade of the Ontario government dragging us through the courts, including during the pandemic. Undervaluing our work undermines the sustainability of midwifery. Midwives want Premier Ford to stop spending tax dollars fighting midwives and to invest in closing the gender pay gap instead. It’s time this government uses tools, like evidence-based job evaluations and intersectional gender-based analysis, to value the skills of midwifery work,” Tecson.

The courts found the Ontario government is undervaluing the work and worth of midwifery because it associates midwifery with women and women’s care work. The courts have accepted that midwifery work, when compared to work done by physicians (which is work historically associated with men), is drastically undervalued. This undervaluing represents a form of gender-based discrimination, illegal under Ontario’s Human Rights Code. Pay equity isn’t about paying midwives the same as physicians, but about comparing their work by understanding the skills, effort, responsibility and working conditions to eliminate gender bias.

Undervaluing work that is associated with women is a pervasive problem. The Equal Pay Coalition notes that in Ontario, women earn only 70 cents on the male dollar.

A copy of the Ontario Court of Appeals decision and further background on the case can be accessed at www.ontariomidwives.ca/pay-equity-midwives.

The AOM advances the clinical and professional practice of Indigenous and Registered midwives in Ontario with a vision of midwives leading reproductive, pregnancy, birth and newborn care. There are over 1,000 midwives in Ontario, serving more than 250 communities across the province. Since midwifery became a regulated health profession in 1994, more than 250,000 babies have been born under midwifery care. For more information, visit: https://www.ontariomidwives.ca/midwifery-numbers 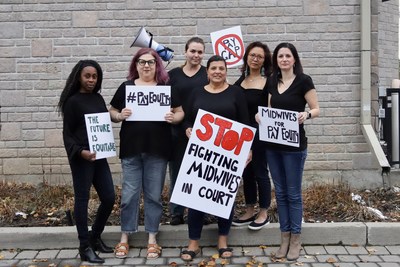