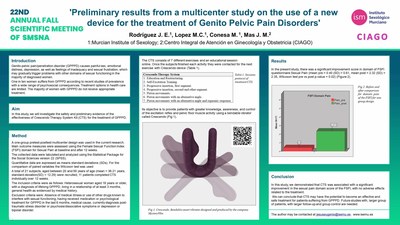 MysteryVibe’s recent medical study focusing on Genito-pelvic pain/penetration disorder (GPPPD) was conducted by Dr. Jesús E. Rodríguez of the Murcian Institute of Sexology (ism) and The Comprehensive Center for Gynecology and Obstetrics (CIAGO). The findings were presented in Scottsdale, AZ at last week’s SMSNA‘s 22nd Scientific Meeting, the perfect forum due to its longstanding reputation for encouraging and supporting the highest standards of practice, research, education, and ethics in the study of human sexual health.

Genito-pelvic pain/penetration disorder (GPPPD) is known to cause painful sex and difficulty with vaginal penetration. If left untreated, GPPPD can cause a cascade of negative consequences like emotional distress, depression, feelings of inadequacy and sexual frustration and may in turn trigger problems with other domains of sexual functioning. 1 in 10 women suffers from genito-pelvic pain and treatment options are as limited as access to treatment. As it stands, the majority of women diagnosed with GPPPD do not receive appropriate treatment. Due to this, MysteryVibe set GPPPD as one of their core focus areas and invested over 7 years in research and development to create devices that deliver accessible solutions to patients in this area.

Crescendo is a FDA II medical device designed to assist women suffering from pain related sexual health issues – GPPPD being one of them. It’s based on the principle that vibrations, when accurately delivered, are proven to increase blood flow, resulting in pain relief. Crescendo’s uniqueness comes from its revolutionary adaptable design. The device can be bent to take different shapes and work with all body shapes and sizes. With superior bendability, the device can deliver precision vibrations exactly where the stimulation is needed. In this case, progressive insertion and vibration was used to invoke the arousal reflex.

The aim of this study was to investigate the effectiveness of Crescendo Therapy System (CTS) Kit in treating GPPPD. A one-group pretest-posttest multicenter design was used in the study. Main outcome measures were assessed using the Female Sexual Function Index (FSFI) questionnaire domain for Sexual Pain at baseline and after 12 weeks. The collected data were tabulated and analyzed using Statistical Package for the Social Sciences (SPSS). Quantitative data were expressed as means ± standard deviations (SDs). For the comparison of paired variables the Wilcoxon test was used.

A total of 21 subjects, who were living in a heterosexual relationship for at least 3 months, aged between 20 and 59 years of age (mean = 36.21 years, standard deviation (SD) = 12.29) with a diagnosis of lifelong GPPPD and general health as evidenced by medical history were recruited. Over the 12 week period, participants were instructed to use the CTS Kit for seven different pelvic exercises and attend an online educational session. Once the subjects finished one exercise they were contacted for the next exercise. The objective of the exercises was to provide participants with knowledge, awareness, and control of their pelvic floor reflexes. Using Crescendo, they controlled, trained, and monitored their pelvic floor activity.

Dr. Rodríguez adds, “This 7-session online program has been created so that therapist can use it as a first line treatment. While participants in this study were couples, the CTS system is designed such that it can be used individually without the need for collaboration from your partner”. The findings showed that using Crescendo resulted in an unprecedented improvement score in the domain of FSFI questionnaire Sexual Pain (mean pre = 0.40 (SD) = 0.61, mean post = 2.32 (SD) = 2.35, Wilcoxon test pre vs post p-value = 0.02) – a 480% (five times) improvement. The research concluded that Crescendo’s Therapy System was a highly effective treatment option for women with GPPPD with no adverse effects related to the treatment.

The study results and acceptance to SMSNA marks a tremendous step for MysteryVibe and more generally in the domain of devices as a solution for major sexual health conditions. They set an important precedent in sexual health where devices can not only be complementary to medicines and therapy but also deliver many-fold improvement on their own.