SARASOTA, Fla., April 15, 2022 /PRNewswire/ — After 7 months of chemotherapy, legendary ESPN broadcaster Dick Vitale is in remission. Flanked by his doctors and nurses and buoyed by the good news, the college basketball announcer rang the victory bell in a special ceremony at Sarasota Memorial Hospital’s Brian D. Jellison Cancer Institute on Thursday. 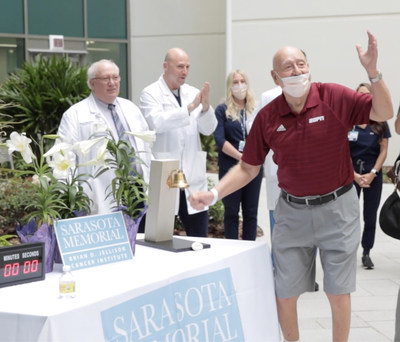 In a small gathering outside the hospital’s oncology tower, Vitale shared his love for his family, his oncology team, and the many friends and fans who have supported him with daily tweets, messages and prayers.

With a voice full of emotion, he said he was inspired through his own cancer journey by the words of his friend and former colleague, the late Jim Valvano — “Don’t Give up DON’T EVER GIVE UP!” and the promise he made to all the courageous kids fighting cancer to continue raising awareness and funds for pediatric cancer research and treatment.

Vitale’s lymphoma diagnosis came just a few months after treatment for melanoma earlier in the year, and while he was receiving continuing treatment in another state for a vocal cord disorder – all amid the challenges of a global pandemic.

“At 82, despite all of the treatments, traveling and medical challenges, Dick has done phenomenally well – he is in remission and we are excited to see him return to the life he loves,” said Brown, who will continue to provide follow-up care and periodic scans to monitor Vitale for any signs of recurrence.

During the chemo completion ceremony, Vitale recognized his medical team and nurses by name, saying “If I were on ESPN now, I would simply say, “They are AWESOME baby, with a capital A!”

The oncology team presented him with a river rock they hand-painted with a basketball, March Madness brackets and a NCAA Final Four theme. Vitale also selected a rock inscribed with the word “LOVE” to leave behind in the hospital’s Oncology Tower rock garden to inspire cancer patients following in his footsteps.

At the ceremony, Dr. Brown and Jellison Cancer Institute oncology specialists Stephen Kucera, MD, and Kenneth Meredith, MD, who helped diagnose Vitale, honored him for his commitment to cancer research and children battling the disease. Vitale has raised millions of dollars for the V Foundation for Cancer Research and each May hosts a fundraising gala in Sarasota to support pediatric cancer research.

“You’re an inspiration to us all, and the world is a better place with you in it,” Kucera said at the ceremony. “Now let’s get out and raise some money for these kids.”

Brian D. Jellison Cancer Institute
The Oncology Tower on the Sarasota Memorial Hospital-Sarasota Campus is one of several advanced cancer care facilities that make up Sarasota Memorial’s Brian D. Jellison Cancer Institute. The tower serves as a central location and collaborative space where more than 70 community physicians and oncology specialists work with oncology nurses, navigators, counselors, and other cancer care professionals to guide patients through every step of their cancer journey and ensure they have coordinated access to advanced, personalized treatments for their specific cancers. For information, visit www.smh.com/cancer. 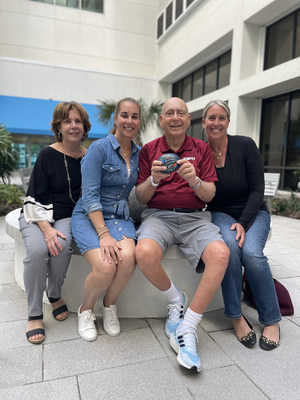 After Two-Year Absence, Bike to Work Day is Friday, May 20