WASHINGTON, June 30, 2022 /PRNewswire/ — As Yuval David heard his name called upon during the 64th Capital Emmy Awards, he immediately started dancing. David, a Jewish LGBTQ activist, won the Emmy for Talent – Program Host/Moderator/Correspondent for his “One Actor Short” series. 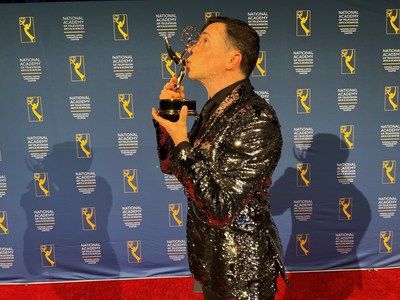 The series showcases a unique approach to man-on-the-street filmmaking with remarkable creativity, stepping into public areas and assembling a diverse cross-section of humanity – spontaneously casting them as actors in his film. He creates an opportunity for them to be playful and spontaneous on camera, which David refers to as “turning a space into a brave space.”

“I’m very excited to have won this Emmy award,” an ecstatic David said at the Emmy Awards ceremony, hosted by the National Capital Chesapeake Bay Chapter. “Getting an award is very meaningful. It does feel wonderful to be recognized and acknowledged for my work. But to do the work, to collaborate with others, is the best reward. I’m so thankful to all of the people who have joined me on this journey.”

As David’s career grows as an actor, host, director and filmmaker, he is making a difference each day as a socio-political activist. Recently, he met with government officials in the nation’s capital to find ways to rescue LGBTQ individuals internationally, who are being persecuted and need help escaping dangerous situations.

He is active in the fight to stop the rise of hatred toward Jews. David regularly speaks and advocates on behalf of marginalized people and communities, including focusing on self-expression through art and creativity in pursuit of social change.

The “One Actor Short” series can be viewed in its entirety on YouTube.

As a filmmaker, David directs, writes, and produces feature length and short films, documentaries, web-series as well as digital and episodic TV content. His other narrative and documentary films and episodic series, including web-series, have also been awarded numerous awards, including Best Film, Best Short, Best Series, and for Yuval specifically as Best Director, Best Actor, Best Producer, and Best Writer in national and international film festivals.

As a TV host and presenter, David focuses on social, political, humanitarian, food, travel, cultural and entertainment programming. His work is seen on network television, documentary films, web series, at live events, and regularly as a commentator on news programs.

Yuval David is an Emmy award-winning actor, host, director and filmmaker who has won over 100 international film festival awards. His work is seen across entertainment and media. He is an active leader in the LGBTQ+ and Jewish communities, advocating and advancing socio-political initiatives, working alongside government officials and non-governmental organizations to save people in life-threatening situations.

David is the Director of Mobilization for the End Jew Hatred movement, is on multiple councils, boards, and collaborates with prestigious organizations GLAAD, HRC, The National LGBTQ Task Force, The Shoah Foundation, JewBelong, Rainbow Railroad, Freedom House, Dignity LGBTQI, the Creative Community for Peace, and the Black Jewish Entertainment Alliance, among others. He is active across social media, including YouTube, Instagram, Facebook, Twitter, TikTok, and Linkedin.