NEW YORK, Aug. 20, 2021 /PRNewswire/ — Korean Cultural Center New York (KCCNY) and the Korean Film Council (KOFIC), branches of the Ministry of Culture, Sports and Tourism (MCST) of the Republic of Korea is pleased to present THE ACTOR IS PRESENT, an unprecedented exhibition featuring photographs of 200 Korean actors representative of the past, present, and future of Korean films, including YOUN Yuhjung (Minari, The Housemaid), CHO Yeojung (Parasite), and LEE Byunghun (Masquerade, A Bittersweet Life). Renowned Korean photographers KIM Jungman and AHN Sungjin, who have shaped the contemporary photography industry of Korea, have participated in this major campaign to capture the iconic images of the actors. The exhibition is on view at the Gallery Korea at the Korean Cultural Center New York from September 8th to October 6th, 2021. 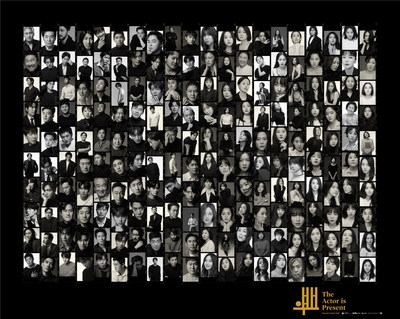 THE ACTOR IS PRESENT is a part of a greater campaign, Korean Actors 200, launched by the Korean Film Council to create a growing archive of Korean actors through writings, photos, and videos and to provide access to these materials to a global audience. Such a campaign is an unparalleled record for Korean film history.

First launched in 2020 during the global pause in the global film industry due to the COVID-19 pandemic, the campaign was a direct response to the rising interest in Korean actors, but a lack of archival materials to adequately introduce Korean actors to the world. The campaign, available for all to view online, drew explosive responses from Korean film fans all over the world, affirming that Korean films are center stage in shaping the global cultural landscape in the 21st century.

“A concurrent exhibition held in New York City and Seoul is a powerful signifier of the impact that Korean film is having on the global stage,” said JO Yun Jeung, Executive Director of the Korean Cultural Center New York. “The range of actors presented here represents not only their caliber, but the achievements that Korean film has made for over a century.”

“We expect that this campaign will increase the level of recognition Korean actors are enjoying abroad and also support those who aim to gain further international opportunities,” KIM Young-jin, Chairperson of the Korean Film Council added. “This is just another starting line for the future of Korean films.”

About the Exhibition
Korean film is global. A new chapter in the 100-year history of Korean cinema has opened, catalyzed by Director BONG Joonho’s Parasite win of the Palme d’Or at the 2019 Cannes Film Festival, followed by four awards, including the Academy Award for Best Picture in February 2020. In April 2021, YOUN Yuhjung became the first Korean female actor to win awards at more than 40 international film festivals, including Best Supporting Actress at the U.S. Academy Awards. These splendid achievements are by no means a singular event; news about Korean actors’ achievements at overseas film festivals continues to be heard. These triumphs are the fruit of the history that Korean films have built over the past 102 years and a signal that foretells a significant wave of change in the global film industry in the 21st century.

In order to further maximize the impact of the Korean film industry following this unprecedented global interest, the Korean Cultural Center New York together with the Korean Film Council is proud to present THE ACTOR IS PRESENT, the first global exhibition of its kind. This exhibition is a bold declaration that each Korean actor is here and present. Through a single photo, celebrated photographers KIM Jungman and AHN Sungjin have captured the soul and essence of each actor, each image becoming a movie in itself.

The exhibition and special moving trailers will be available to view fully online: www.koreanculture.org. Visitation to the Gallery Korea is by online reservation only; timed tickets available.

THE ACTOR IS PRESENT is accompanied by a limited-edition catalog including photographs of the exhibition collection as well as added special photographs of each participating actor, selected by the artists themselves.

In accordance with the New York State guidelines, the Korean Cultural Center New York has implemented protocols to enhance safety for all staff and guests. We may ask for proof of vaccination prior to your in-person visit.

Full lineup of 200 actors with filmographies available to view online

KIM Jungman / Studio Velvet Underground
KIM Jungman was born in Cheolwon, Gangwon-do, South Korea in 1954. In 1972, he entered the National School of Decorative Arts (École Nationale des Arts Décoratifs) in Nice, France and majored in Western painting. It was there that he became fascinated by photography, which was a new art genre in France at that time. He debuted as a photographer in 1975 with a solo exhibition at Atelier Jean Pierre Soardi in Nice, France. In 1976, he was selected as the youngest exhibitor in 80 Photos of the Day in France and also won the Young Artist Award at the 1977 ARLES International Photo Festival. Since then, KIM Jungman’s bold and unconventional photographs have galvanized both the fashion world and the art circles.

After returning to Korea in 1979, he continued his passionate work beyond the genres of photography, figure photography, and fashion photography. As a result, he is considered a unique photographer who has marked a new era in Korean movie posters. Film posters for works such as A Bittersweet Life (2005), directed by KIM Jee-woon and starring LEE Byunghun, and The Host (2006), directed by BONG Joonho and starring SONG Kangho, were born out of KIM Jungman’s camera. He has captured more than 1,000 Korean film stars.

Although he has stopped commercial activities and focused on his artwork since 2006, KIM Jungman has enthusiastically participated in the filming of the Korean Actors 200 campaign as he connected with the mission to declare that “the actor presented here will touch the whole world.”

AHN Seongjin / Agency TEO
AHN Seongjin was born in Seoul in 1967. In 1987, he entered the Department of Theater and Film at Chung-Ang University, but after graduation, he fell into the world of photography. AHN studied photography as the first pupil of photographer KIM Jungman, who headed the new wave in the Korean photography industry. After debuting in 1992, AHN Seongjin has built his reputation as leading the Korean commercial photography world.

AHN is known as a photographer who deeply understands the intent of the original content that the artist wants to convey and is able to capture the depth of a full story in a single photo. Starting with shooting the album jackets of representative Korean musicians of the 1990s, AHN has shot hundreds of posters of films and plays, including more than 500 album jackets. Famed actor Bae Yongjoon who headed the K-drama wave, and musician Psy, who caused the global K-pop sensation, also worked with AHN Seongjin to build their visual concepts.

As a film major and photographer who witnessed the Korean Film Renaissance in the 2000s, AHN Seongjin will enable the Korean actors to discover their ‘new personas’ through his lens.

Korean Cultural Center New York
Inaugurated in 1979, the Korean Cultural Center New York is a branch of the Ministry of Culture, Sports and Tourism (MCST) of the Republic of Korea. KCCNY works to promote cultural arts exchange and stimulate interest in Korean culture through various opportunities including exhibitions, concerts, film festivals, and educational programs. www.koreanculture.org

Korean Film Council
The Korean Film Council (KOFIC) is a public institution established to improve the quality of Korean films and promote them and the film industry, a role entrusted by the Ministry of Culture, Sports and Tourism (MCST) of the Republic of Korea. www.koreanfilm.or.kr