WASHINGTON, Dec. 18, 2020 /PRNewswire/ — On December 3, 2020 Judge Jennifer M. Anderson of the Washington, DC Superior Court issued a “Remedies Judgement” in the controversial “Family Federation for World Peace and Unification International et al v. Hyun Jin Moon et al” case which totally disregards the defendants’ First Amendment rights and due process. Anderson’s ruling has stoked the worst fears of all those concerned not only about the free exercise of religion, but also fundamental rights to organize and associate free from government interference. The case is sure to be continued through the appeals process. 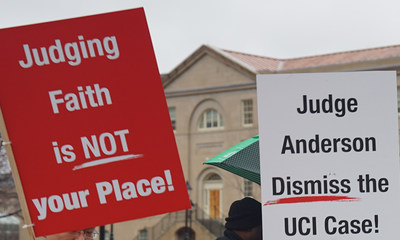 That this court battle is far from over is a great relief for Right To Believe and others upset about the growing encroachment of government (especially in the courts) in the affairs of religious organizations and individuals. In a recent speech to the Federalist Society, Supreme Court Justice Samuel Alito cited numerous court cases impacting the free exercise of religion as indicative that “religious liberty is in danger of becoming a second-class right.”

The case before the DC Superior Court involves protracted disputes within the Unification Movement founded by the late Reverend Sun Myung Moon.  Though it was initially and properly dismissed on First Amendment grounds because it clearly involved religious disputes in which courts cannot intervene, this complex and extremely costly case has been extended by subsequent rulings for more than nine years.

It is well-established legal precedent that the First Amendment prohibits the courts from interfering in disputes about the teachings and leadership of religious groups.  Yet that is precisely what the DC Court has done in this case.  As evident in both summary judgement and remedies rulings, the DC Superior Court disregarded voluminous clear evidence of an emerging religious movement wrestling with issues of succession and doctrine.  It decided that it could sidestep First Amendment prohibitions and evaluate the religious purposes of UCI, a DC non-profit corporation established to advance the principles and work of the Unification movement. In doing so, the Court in effect took sides in a religious schism.

The onerous actions taken by the DC Court in its remedies ruling of December 3 are cause for great alarm among religious and nonprofit leaders alike.  Based solely on its unconstitutional evaluation of UCI’s religious purposes, the Court found that four directors had breached their fiduciary duty, ordered them removed from the Board, and made them personally responsible for crushing financial penalties. This severe judgement was imposed even though in its ruling, the Court itself acknowledged that the four directors had not received any personal benefit whatsoever. The court then instructed the remaining board members to appoint new directors favorable to the plaintiffs, in what amounts to a hostile takeover of the nonprofit.

So why does this matter?  The DC Superior Court’s rulings in this case have trampled upon First Amendment protections, making determinations about religious teachings and leadership, and thereby taking sides in a schism.  Such dangerous precedents make all religious groups more vulnerable to government intrusion. The Court took the unprecedented step of removing a majority of the directors of this nonprofit’s Board, seriously overstepping its authority and disregarding requirements specifically articulated in DC law.  The December 3rd ruling also constrains the remaining directors as to how they can select replacement Board members, forcing a reconstitution of the organization’s leadership, again without legal authority.  Board members of every nonprofit incorporated in the District of Columbia should be alarmed about the details of this case, for there could be dire extralegal ramifications should they face any disputes before the DC Court.

It should also concern people of all faiths that the courts are often all too ready to use such cases as opportunities to expand their powers and authority.  Judicial overreach opens a Pandora’s box of government encroachment into religious expression and free exercise. It can, and often does, lead to protracted legal battles; distracting religious organizations and nonprofits from their primary missions, and forcing them to bear heavy costs to defend themselves.

If Judges can decide what aspects of your faith are valid, or what is not in the public interest, the implications for religious freedom are vast. It opens the door for government, not God, to be the final arbiter of the human conscience.

The rulings in this case, if upheld, set dangerous precedents in the District of Columbia and beyond. Bishop Dr. Paul Murray, Chairman of the Religious Freedom Commission of One Way Churches International, noted “Judicial overreach is a growing concern for faith leaders of all backgrounds.  Freedom of religion, belief and conscience is our first and most fundamental right.  Rulings like the ones in this case remind us that we must be vigilant and stand together to safeguard the First Amendment rights of all.”