OTTAWA, ON, Dec. 2, 2020 /CNW/ – Already a Paralympic champion, Canadian Paralympic Hall of Famer, and highly-regarded leader in sport, Josh Dueck is adding a new title to his name on Wednesday, as the Canadian Paralympic Committee announced the retired Para alpine skier will lead Canada at the Beijing 2022 Paralympic Winter Games as chef de mission. 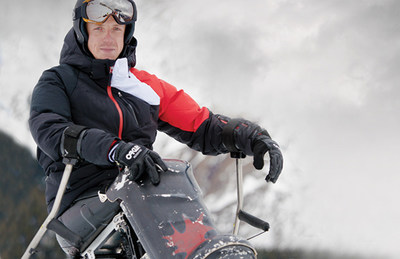 From Kimberley, B.C., Dueck has spent much of his life on the slopes. He made his Paralympic debut in his home province in 2010, winning a silver medal in the men’s sitting slalom race. Four years later at the Sochi 2014 Paralympic Winter Games, he was back on the podium and this time graduated to the top step – winning gold in the super combined. He also added another silver medal in the downhill and was subsequently named Canada’s Closing Ceremony flag bearer.

“When I got the call with the news that I was named to lead the Canadian Paralympic Team my mind started to dance with possibility,” said Dueck, who lives in Vernon, B.C. with his wife Lacey and children Nova and Hudson. “To be a champion for sport, friend, and mentor to the athletes, and part of the support team for Canada at the Paralympic Games is an incredible privilege. There is a great sense of honour and duty that comes with this storied role, and I look forward to learning from our history and building on this legacy with our teams.”

Today, Dueck is the executive director of Freestyle BC in addition to his work as a peer mentor, motivational speaker, and ambassador, spreading his message of hope, sharing his story of overcoming adversity, and promoting active living. He particularly likes to work with those who have experienced a life-altering injury, like himself – he was injured in a ski accident, six years prior to his Paralympic debut – and believes in empowering individuals to discover what is possible for them. Dueck himself has pushed his abilities, becoming the first person to successfully perform a back flip on a sit ski.

Dueck, who was inducted into the Canadian Paralympic Hall of Fame last year, also worked as a broadcaster with CBC at the Pyeongchang 2018 Paralympic Winter Games.

“We could not be more pleased to have Josh come on board for Beijing 2022,” said Marc-André Fabien, president, Canadian Paralympic Committee. “He is the epitome of strong athlete leadership and will bring so much positive energy, thoughtful introspection, fresh ideas, and valuable support to the team. He is incredibly well respected within the sport community, has been a longtime passionate advocate for Paralympic sport, and brings in many different experiences and perspectives from his many roles in sport. We know his leadership and presence will make a difference for the entire Canadian Paralympic Team in Beijing.”

As chef de mission, the 2018 BC Sports Hall of Fame inductee will promote and celebrate the Canadian Paralympic Team, share his experience and guidance with athletes, coaches, and staff, and be a significant member of Canada’s leadership team as it looks to provide the best possible environment for all athletes to thrive and have a positive experience.

“I hope to be fearlessly authentic in my life, work, and actions as chef de mission in an effort to inspire and challenge the entire team, as well as Canadians from coast to coast to coast, to be brave in the face of adversity,” said Dueck. “One measure of success will be to see the athletes achieve, and exceed, their competitive goals at the Games. Winning may not be everything to everyone, nor should it be. As my father would tell me, the intrinsic reward is sufficient. My hope is that each athlete and coach feel they have done everything in their control to prepare themselves for their moment to shine.

“The story of every athlete is filled with hope, opportunity, challenge and often uncertainty. Athletes are trained to embrace challenge, let go of the things they cannot control, and to persevere through even the most difficult situations, in an effort to be a little better today than we were yesterday. In the world today, we need more beacons of hope that remind us we can rise above the challenges we face. My goal is to help share these stories of hope.”

The Beijing 2022 Paralympic Winter Games will take place March 4-13, 2022. Canada is expected to compete in all five sports – Para alpine skiing, Para nordic skiing, Para snowboard, Para ice hockey, and wheelchair curling – and is coming off its most successful Winter Games ever in PyeongChang with 28 medals.

BEIJING, Jan. 25, 2021 /CNW/ -- Against the backdrop of a pandemic that has taken tolls on global public health and put the world...

WASHINGTON, Jan. 25, 2021 /PRNewswire/ -- The Teamsters Union applauds President Biden's efforts to reform and strengthen Buy American policies through the Made in America...