It's Time for the Oil & Gas Divestment Campaign to Drop its Unsustainable Actions and Get on Side with Energy Consumers: Group Spokesperson

CALGARY, AB, Feb. 25, 2022 /CNW/ – As the world’s future energy supply continues to tighten and families in Europe and around the world are forced to make tough choices between heating their homes and feeding their households, punishing Canadian banks for working with the Canadian oil & gas sector hurts everyone, a spokesperson for Canada Action says. “At the end of the day, it makes complete sense for Canadian banks to team up with Canadian businesses that support Canadian families, workers, and Indigenous and non-Indigenous communities across the country,” Canada Action founder and spokesperson Cody Battershill said.

Earlier this week, Shell stated in its corporate outlook that global demand for liquefied natural gas (LNG) is expected to cross 700 million metric tons per year by 2040, a 90 percent increase from 2021 consumption.

“We know there’s an energy shortage occurring around the world, which is contributing to global political instability and we know that reliable oil and gas supply from Canada is desperately needed,” Battershill said. “That crisis is causing real impacts like food shortages, plant shutdowns, a lack of affordable residential heating and household electricity.”

“Many families are forced to choose between food and heat, and Canada should be part of the solution.” Battershill added.

Canada Action is speaking out as Greenpeace this week urges its supporters to call on Canada’s largest banks to stop funding Canadian energy businesses.
But the divestment campaign has its share of detractors. In California, where two state employee retirement funds hold a combined $700 billion in assets, including $9 billion in fossil fuel-related investments, the funds’ leaders say the best approach is to advocate as shareholders for the companies and to continue to move toward sustainability.

“One investor selling shares to another does not drive change at a company,” a fund director is reported to have said.

Canada Action’s Battershill added: “Global markets are familiar with Canada’s world-leading reputation as a progressive, reliable energy supplier committed to continual improvement. Greenpeace and its divestment campaign are on the wrong track, plain and simple. The campaign won’t keep a single barrel of oil or gas in the ground, but will only shift production to less responsible producer countries.”

Now more than ever, the world needs access to responsibly produced and reliable energy from Canada.

Canada Action is a non-partisan, national coalition that advocates for the responsible development of Canada’s natural resources, for the sectors that move that development forward, and for the workers, families and communities the sectors support. 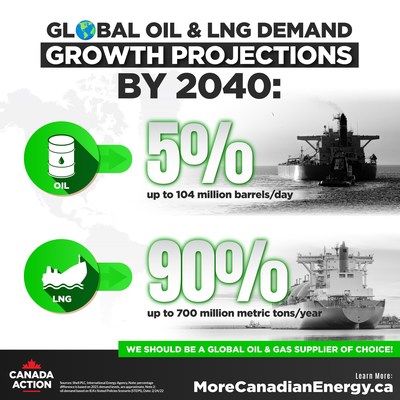