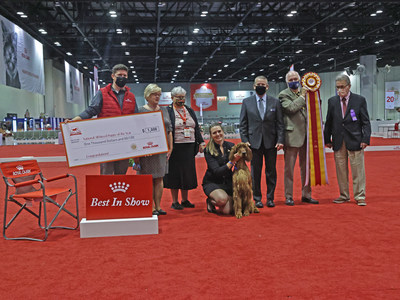 Coverage of the AKC Royal Canin National All-Breed Puppy and Junior Stakes is available for replay at AKC.tv.

After winning Best of Breed competitions, the following top dogs went on to win in their respective groups and compete for Puppy/Junior of the Year:

Hound: Baha Babylon And On, a Saluki known as “Ginger,” owned by James Donahue, D. Scott Pfeil and Fran Donahue of Ingleside, IL and bred by Caroline Coile/Rachel Rehberg.

Toy: CH Hallmark Jolei Out Of This World, a Shih Tzu known as “Comet,” owned and bred by Luke & Diane Ehricht of Monclova, OH.

Herding: Eclipse Ace In The Hole, a Berger Picard known as “Rupert,” owned by Chris Ruppenthal of Shingle Springs, CA and bred by Donna Beadle/Michael Beadle.

About the American Kennel Club
Founded in 1884, the American Kennel Club is a not-for-profit organization, which maintains the largest registry of purebred dogs in the world and oversees the sport of purebred dogs in the United States. The AKC is dedicated to upholding the integrity of its registry, promoting the sport of purebred dogs and breeding for type and function.  Along with its more than 5,000 licensed and member clubs and its affiliated organizations, the AKC advocates for the purebred dog as a family companion, advances canine health and well-being, works to protect the rights of all dog owners and promotes responsible dog ownership. More than 22,000 competitions for AKC-registered purebred and mixed breed dogs are held under AKC rules and regulations each year including conformation, agility, obedience, rally, tracking, herding, lure coursing, coonhound events, hunt tests, field and earthdog tests. Affiliate AKC organizations include the AKC Humane Fund, AKC Canine Health Foundation, AKC Reunite and the AKC Museum of the Dog.  For more information, visit www.akc.org.

ABOUT ROYAL CANIN USA
Royal Canin USA is a leader in science-based cat and dog health nutrition. Founded by a veterinarian in 1968, Royal Canin has more than 40 years of experience in delivering individualized nutritional solutions. In collaboration with an expert team of nutritionists, breeders and veterinarians from around the world, Royal Canin places cats and dogs at the central point of the innovation process. The Royal Canin product line offers a range of diets based on size, age, breed, lifestyle and therapeutic requirements. Royal Canin diets are available at veterinary hospitals and pet specialty stores nationwide. Royal Canin is a subsidiary of Mars, Incorporated. To learn more about Royal Canin, visit www.royalcanin.com and “LIKE” us on Facebook at www.facebook.com/royalcanin.us.

Outliers: The Story of Success