Leo Geng, Senior Vice President of iQIYI said during the event, “We remain committed to creating best-in-class Asian entertainment as we build an extensive offering of high-quality content and make it more accessible for our North American audiences and partners. As a result, over the next two years, iQIYI will invest in the production of over 200 original Chinese-language content to meet the diverse demands of its global audience.”

During the showcase, iQIYI’s North American team featured a selection of upcoming titles, including Love Between Fairy and Devil and Mr. Bad, two much-anticipated shows from iQIYI’s Sweet On Theater. Love Between Fairy and Devil tells the story of a young fairy (played by Esther Yu) and a devious warrior (played by Dylan Wang). Mr. Bad is about a novelist (played by Shen Yue) who accidentally summons the villain (played by Chen Zheyuan) in the novel she has written. These two shows are representative of the Sweet On Theater, a collection that combines traditional mythology, sci-fi, comedy and fantasy, around the core theme of romance. 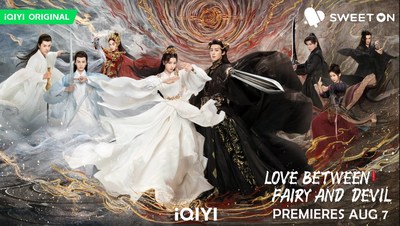 iQIYI is well-known amongst Generation Z in North America, and continues to introduce content suiting the interest of young adult and teen audiences. The Heart of Genius, which was released last month, follows a teen girl (played by Zhang Zifeng) alongside her father (played by Lei Jiayin) and her first love Pei Zhi (played by Zhang Xincheng). This is a story of the pursuit of truth and love between the three main characters.

Meanwhile, Checkmate is a Chinese adaptation of the iconic Hercule Poirot series from Agatha Christie. Lost In the Kunlun Mountains is the new series starring Xu Kai, who is known for his previous role in series such as Falling Into Your Smile. In Fox Spirit Matchmaker 1 follows a romantic story starring lead actors Yang Mi and Gong Jun. In Love You Seven Times, Yang Chaoyue and Ding Yuxi come together in a story about two fairies who are banished to the mortal world. Thousand Years for You follows a thousand-year-old general (played by Ren Jialun) and his fantastical encounters with a tribal chief (played by Li Qin).

Content on iQIYI International comes with subtitles in more than ten languages, a testament to iQIYI’s longstanding commitment to promoting Asian content globally.

iQIYI International can be downloaded from app stores or via its website: www.iq.com. iQIYI International is now also available via Smart TV applications so that more global users can gain access to iQIYI’s rich content library. A full list of these is provided below: