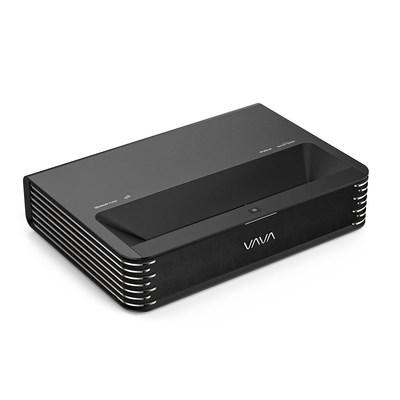 “That triple laser system definitely performs as advertised, produced bright and vivid images, whether in 4K or 1080p.” Reviewed by JC Torres at Slash Gear, “That system is also powered by the highest ALPD 4.0 technology, giving it an edge even against most cinemas that still use ALPD 3.0.”

80-150″ Display Range
Unlike traditional projectors, the Chroma uses ultra short throw technology and boasts a 0.233:1 throw rate. The projector can be placed just 7.2″ away from the wall for a stunning 100″ projection and can be easily adjusted up to 150″ for a cinematic experience.

Smart Android TV system
The VAVA Chroma builds in the Android 9.0 system and Aptoide app store, which means apps including YouTube, Netflix, HBO, Hulu, Disney+, and more will be accessible through the built-in OS. It is also compatible with various streaming devices on the market, including Apple TV, Nvidia Shield, Chromecast, Fire TV, Roku TV, and more.

About VAVA: VAVA’s goal is to simplify modern life through exceptional expertise and the highest quality technology.  VAVA designs and manufactures a line of cutting–edge and innovative products directed toward improving the lives of its customers. Additional information about VAVA and its award-winning products can be found at the VAVA official store.