OTTAWA, ON, Dec. 2, 2020 /CNW/ – In his hilarious debut novel, Puck Luck, author David Wylynko tells the tale of a former Junior hockey player blackmailed into coaching a teenage team, and comically blows the whistle on some of the most egregious infractions in the sport, from savage parent brawls to coaching tantrums to debilitating player injuries. No one goes unscathed. 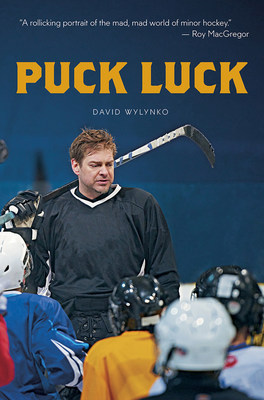 Visit puckluck.hockey for an excerpt, reviews, and more on the author.

Danny Wilde is a beer league bruiser facing a permanent ban from men’s hockey. An aimless handyman, he’s separated from his wife, crashing in a dormitory-style storage locker, and facing criminal charges. When desperate hockey parents coerce him into coaching, he quickly realizes his temperament is ill-equipped for the merciless politics, chaotic schedule, and maddening protocols of minor hockey.

Puck Luck is a page-turning romp applauded by hockey media personalities from TSN, the Globe and Mail, Sportsnet, the Canadian Press, Postmedia and The Hockey News.

“It’s an insider’s view of the crushing intensity and comic absurdity of the game we love,” said TSN hockey host James Duthie.

“Puck Luck is a rollicking portrait of the mad, mad world of minor hockey and the wacky culture of beer leagues,” commented Globe columnist and bestselling author Roy MacGregor.

“You can’t help but laugh at this look at hockey culture in Canada and the ridiculous politics, and the hockey parents, involved,” added Sportsnet hockey reporter Christine Simpson.

Wylynko’s tale “skewers the ridiculousness of minor hockey politics and tugs on our hockey heartstrings,” noted Donna Spencer of the Canadian Press.

“What happens when a conniving hockey nut with zero people skills takes over a team of teenagers?” posited the author, a lifelong player and former coach who started writing professionally as a teenage sports reporter. “Crazy meets crazy.”

Danny’s misadventure quickly erupts into a comedy of errors that spans arenas, bars, hotels, cottage country, court, an ambassador’s residence, and the “war room” of a scheming hockey administrator.

A slimmed down version of War and Peace on ice, the story tracks the tribulations of several hockey families and coincides with much of the 2018-19 NHL season. Puck Luck is available in paperback from Amazon Book, and as a Kindle or Kobo ebook.