TORONTO, Feb. 21, 2021 /CNW/ – Human traffickers are reaping large profits across Canada using defined transportation corridors in Canada to exploit and control their victims, according to a new report released by The Canadian Centre to End Human Trafficking. 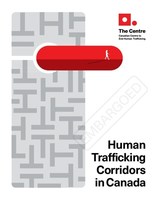 Human Trafficking Corridors in Canada, is a first-ever study of human trafficking transportation corridors in the country, notes that human traffickers benefit from primary transportation routes across the country to maximize profit within commercial sex markets and to avoid being caught by law enforcement and potentially imprisoned. These routes – identified by law enforcement, frontline service delivery agencies and the media – also allow human traffickers to exert control over victims and ensure that the victim has limited opportunities for escaping or evading their trafficker.

Constant movement between cities and provinces keeps victims of human trafficking confused, isolated and dependent on their traffickers. It also makes it easier for traffickers to avoid detection by law enforcement, which is what makes it such a low risk, high reward crime. “The shorter amount of time spent in each city, the more beneficial it is for the traffickers. It takes time for police to set up an investigation. If they are only in town for a couple of days, it’s harder to track,” said one law enforcement respondent.

The study also found that almost half of the victims and survivors of human trafficking came from another city within the same province. Facing stigma, challenges navigating services, addictions, lack of appropriate housing/shelter, lack of emergency services, and lack of trust in the system while accessing services, victims and survivors of human trafficking face “… multiple layers of trauma and abuse. They need an entire wrap around model – dental, tattoo cover up, treatment for addiction, medical care. One [survivor] wanted to change their hair colour to be less recognizable,” explained a service provider respondent.

“Human trafficking exists in every community in Canada with human traffickers having only one goal: to generate as much revenue as possible. To do this, they rob survivors of their basic human rights,” said Julia Drydyk, Executive Director, The Canadian Centre to End Human Trafficking. “We implore all levels of government to commit to a pan-Canadian, interjurisdictional approach to end human trafficking by funding services in perpetuity. We must ensure that programs and services provide exceptional, meaningful and effective supports to victims and survivors.”

About the Canadian Centre to End Human Trafficking:

The Centre is a national charity dedicated to ending all types of human trafficking in Canada. We work with like-minded stakeholders and organizations, including non-profits, corporations, governments and survivors/victims of human trafficking, to advance best practices, eliminate duplicate efforts across Canada, and enable cross-sectoral coordination by providing access to networks and specialized skills. We operate the Canadian Human Trafficking Hotline at 1-833-900-1010, a 24/7, multilingual access to a safe and confidential space to ask for help and connect to services.

What is human trafficking?

Human Trafficking is defined as recruiting, transporting, transferring, receiving, holding, concealing or harbouring a person, or exercising control direction or influence over the movements of a person, to exploit them or to assist in facilitating their exploitation (sections 279.01 and 279.011 of the Canadian Criminal Code).