HONG KONG, Nov. 6, 2022 /PRNewswire/ — This November, IIIF150 launched the Air1 Ultra, a new product in the Air1 Series, which is thinner, lighter and more powerful. It follows the June release of the Air1 Pro with its unique Maple color scheme, overturning people’s original impression of rugged phones. In particular, its ultra-thin design makes the phone stylish and slim. 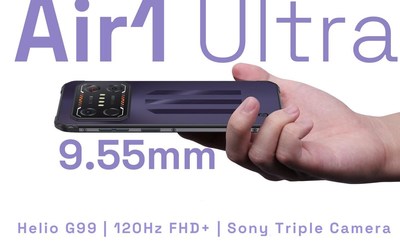 The Air1 Ultra continues the thin and light design of the Air1 series, ensuring the protective properties of the rugged phone and reasonable battery power, while making the phone an amazing 9.55mm. It is the world’s thinnest rugged phone to date.

MediaTek has launched its latest mobile processor, the Helio G99. It is based on a 6nm architecture, and has 2 ARM Cortex-A76 cores with a top speed of up to 2.2GHz, and 6 Cortex-A55 cores at up to 2.0GHz, which is the most powerful MediaTek 4G processor so far. Even though, G99 is a 4G/LTE-only chipset, MediaTek asserts that it will make for some of the highest-performing new phones with this level of connectivity.

Air1 Ultra is equipped with a 6.8″ 120Hz FHD+ screen, which is the world’s first 120Hz screen on rugged phones. It is over 460ppi, making the screen clearer and sharper. You can see clearly even in the sunlight.

Also, the breathing light of Air1 Pro is impressive. Air1 Ultra upgraded it to 4 custom color lights, what’s more, it added rhythm light which can flash to the rhythm of the music.